Advent at USMC: Waiting before Celebrating The crowd in Alumni Hall on November 16.

When over 250 guests filled Alumni Hall 100 on November 16 to attend USMC’s third annual Dante Lecture, they became the beneficiaries of over four decades of work. Both the lecture and the collection being exhibited in the library next door were established through the generosity of two St. Mike’s graduates: Alberto Di Giovanni, 7T1, and his wife, Caroline Morgan Di Giovanni, 7T0.

In 1976, Alberto founded an institute for the propagation of Italian culture, the Centro Scuola e Cultura Italiana. Since then he has personally taken “about 10,000 students” to visit Italy as part of the centre’s programs, which also provide for Italian language instruction at the elementary-school level. In addition to working as the director of the centre, during this period he continued to pursue his passion for the 13th-century Italian poet Dante Alighieri. Visiting the Vatican Library with Fr. Leonard Boyle, its director, ignited a further interest in manuscripts, and soon Di Giovanni began to gather an extensive collection of materials on Dante that today includes rare books, prints, photochemical copies of illustrations, and limited-edition facsimiles. 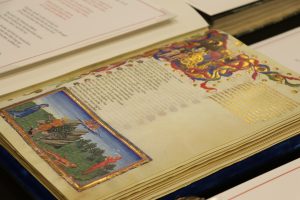 One of the illustrated books on display in the exhibit La Divina Commedia.

After working at the centre to support Italian language and culture in Toronto for nearly all of his adult life, Alberto and Caroline donated his collection of rare books and art to USMC in 2014. That same year, with the support of Centro Scuola e Cultural Italiana, they also made a generous gift to USMC that endowed scholarships for students studying Dante and the Italian language as well as the annual Dante lecture. The decision has its roots in the Di Giovannis’ own days at St. Mike’s.

“St. Mike’s was the first place in my heart,” Di Giovanni said, because it was there that he “was embraced” by a community of scholars and students during his difficult early years in Toronto. “My English was very limited, and understanding that, they always encouraged me to continue to study and took a particular interest in my progress.”

“I consider those years among the best years of my life,” he said. The Di Giovannis hope that housing the collection at St. Mike’s will make it available to generations of students and scholars, and that the school will become a centre in North America for Dante research. They also hope that more people will come to believe that “Dante belongs to everyone, [to] world culture, [and] cannot be related just to the Italians.” 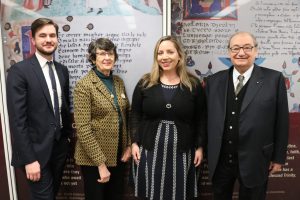 The scholarships and lecture that the Di Giovannis endowed have also brought the Italian community in Toronto together around USMC, and on November 16, many members of that community came to the school to hear Dr. Henrike Lange of UC Berkeley deliver this year’s Dante lecture, titled “Seeing Dante Reading.” Dr. Lange gave an overview of the poet’s most well-known work, and surveyed themes in visual responses to the Commedia across the centuries.

In his remarks to the audience in Alumni Hall, St. Mike’s President David Mulroney said that Alberto is representative of what is best in our alumni community. Mulroney notes that for Alberto, as for so many of our alumni, higher education at St. Mike’s opened the way to a rich interior life, illuminated by a Catholic intellectual tradition that is distinguished by great artists like Dante. “Alberto’s life was transformed by his time here on campus. He has returned that favour many times over, working tirelessly to open up that same path to succeeding generations.”

Professor Lange opened her talk with the suggestion that “visuality is at the centre” of Dante’s work, which “imagin[es] a journey through the otherwise unseen worlds of hell, purgatory and paradise.” Dante’s language “becomes the banner of hope” as it works to produce “coherent literary visions… of life.” 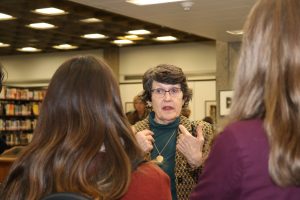 Caroline Morgan Di Giovanni discusses the exhibit with guests at the reception after the lecture.

Since Boticelli, artists in every era after Dante’s time have rendered their own illustrations of the poet’s work. Lange focused her presentation on the 1st and 5th cantos, the most-illustrated cantos in the Commedia, and attributed their popularity among artists to the fact that they illustrate two of the most universal experiences of human life. These she organized into thematic clusters: loss, depression, confusion, despair, and solitude, and love and desire.

Lange began with the earliest marginal illustrations of the text and identified a number of texts that can be found—in original form, facsimile, or otherwise reproduced—in the Di Giovannis’ collection at St. Mike’s. She mapped trends in the larger culture through changing sensibilities in the depictions of the Commedia, such as the special emphasis placed on Dante’s fainting in Canto V during the Romantic era, and transitioned into a discussion of the meaning of collections in relation to the communities that house them. 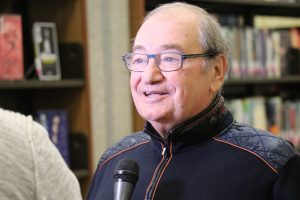 Alberto Di Giovanni being interviewed about the collection and exhibit for an Italian news program on the RAI network.

“Reading Dante, we are not far from walking with Dante,” Lange said, noting how a line could be drawn back to Dante through the figure of eight “grandparents.” Signal artists in each generation lived in the presence of their artistic “grandchildren,” presaging the next era of creative response to the poet. “It’s an intimate knowledge,” she said, referring to the eyewitness knowledge of grandchildren, which illustrates how “just a few degrees of separation away, there was Dante.” The creative responses continue to the present day: Lange ended with a discussion of her own students’ responses to the Commedia, a text that evoked strong responses from them despite their generally lacking any background that would have furnished them with a contextual understanding of Dante. “We can conclude then that there is something deeply connecting in this text.”

Guests had the opportunity to forge their own connections with Dante after the lecture, as a reception immediately commenced in the Kelly Library to celebrate the opening of the of the Dante collection exhibit. Curators Noel McFerran and Remi Pulwer gave tours of the five display cases containing a variety of illustrations presented alongside related texts. Lavish Romantic illustration was on display alongside images done in an Art Nouveau style, and an entire case contained photochemical copies of illustrations that the Italian government commissioned Spanish surrealist Salvador Dali produce for a commemorative edition of the Commedia in the 1960s. Before it came to St. Mike’s, the collection was housed at the Columbus Centre, where the Centro Scuola maintains its headquarters. 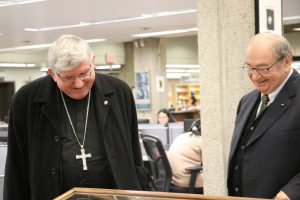 Cardinal Collins and Alberto Di Giovanni tour the exhibit before the lecture.

On the back wall of the library hung a row of paintings, many of which the Di Giovannis provided on loan from their private collection. Cardinal Collins, himself a devoted fan of Dante, visited the exhibit before the lecture for a private tour, and two film crews have since visited the library to create clips on the exhibit for international news programs.

The Di Giovannis have remained the equitable centre of all these proceedings. “I hope that this is the first step, because we do envision a greater collection,” Alberto Di Giovanni said. “Hopefully [it will be] one of the best in North America, if not the best, one day.”

La Divina Commedia, the exhibit on the ground floor of the Kelly Library, will remain open to public visitors through February 15.

Martyn Wendell Jones is a writer in the Office of Communications at the University of St. Michael’s College.