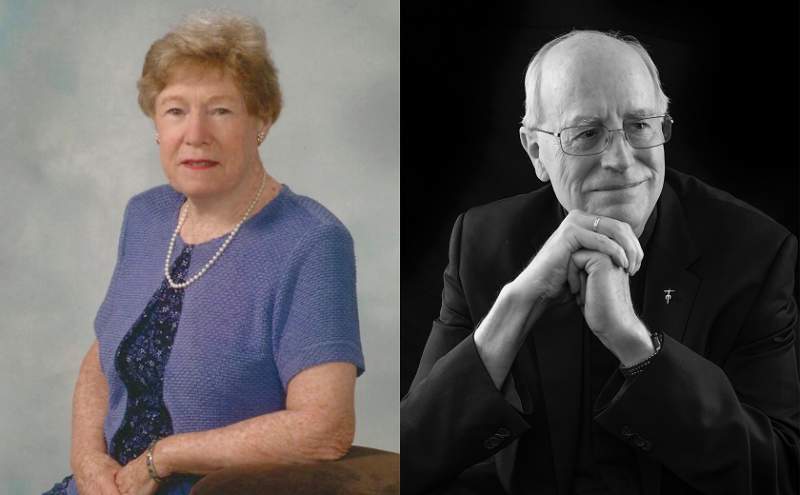 Dr. Catherine B. Shannon and Dr. James Heft, SM (Marianist) will receive honorary degrees at the joint Faculty of Theology and Continuing Education Convocation in November.

At the Faculty of Theology and Continuing Education Division’s 2019 Fall Convocation, not only will new scholars receive degrees qualifying them to conduct high-level research and teach, but two already-accomplished scholars will also receive special honours in recognition of their longstanding contributions. This year’s honorary degree recipients are Dr. Catherine B. Shannon and Dr. James Heft, SM (Marianist), both prolific researchers, writers and educators whose work embodies the ideals of the University of St. Michael’s College.

Dr. Shannon graduated from St. Michael’s with a B.A. in History in 1960, and went on to become a historian of Northern Ireland. In addition to her research on the historical roots of partition and the Northern Irish conflict, she worked to organize conferences and symposia during the 1980s and 1990s to promote dialogue between nationalist and unionist politicians. She has written on the impact of the conflict on Northern Irish women, and convened two conferences where women from Northern Ireland and the Republic discussed their aspirations for peace and their roles in achieving it.

In addition to her scholarship and advocacy, Dr. Shannon has served as a guest historian for museum and historical society exhibits. She has also served on the Executive Board of the American Conference of Irish Studies for over a decade, and has served as president of the Eire Society of Boston and the Charitable Irish Society of Boston.

Dr. Heft is a priest in the Society of Mary and has been a leader in Catholic higher education for over three decades. He received his MA in 1971 and his PhD in 1977 from the Faculty of Theology at St. Michael’s. For years, he served in a variety of teaching and administrative roles at the University of Dayton, where he chaired the Theology department before working as provost and then university chancellor. He departed in 2006 to found the Institute for Advanced Catholic Studies at the University of Southern California in Los Angeles.

A list of all past recipients of honorary degrees from the University of St. Michael’s College can be found here.