SMC One Seminars: Learning, Friendship, and... She recalls sitting in a high school class in Toronto when the work of Caribbean poet and playwright Sir Derek Walcott was being discussed.

“I looked around my class and I was the only black person, yet here were all these other students engaged in his work. It almost brought tears to my eyes,” she recalls.

She had a similar experience this semester when, on the first day of one of her classes, a black woman professor walked in to teach.

“It took me telling my friends what it meant to me for them to understand. People don’t recognize how important it is to have people they can relate to, who are models for them,” she explains. “It’s important for people to take the time to think about how other people – and they themselves – are represented.”

Now, Iyekekpolor is putting that understanding into action at St. Mike’s by launching a new social media campaign called #SoulsofSMC. The campaign, to be overseen by the Office of Student Life, will focus on students on campus whose stories will inspire and motivate their peers to get involved in a range of activities.

“It’s great to know there are other students at St. Mike’s who share your values and experience,” she says.

Weekly posts will focus on someone – usually a student leader – who will select from a list of questions to share her/his experience at St. Mike’s, offering answers to questions such as how to develop a sense of St. Mike’s as home, or how to navigate cultural challenges. The option to choose which questions to answer promises that the profiles will be as unique and diverse as the students themselves. 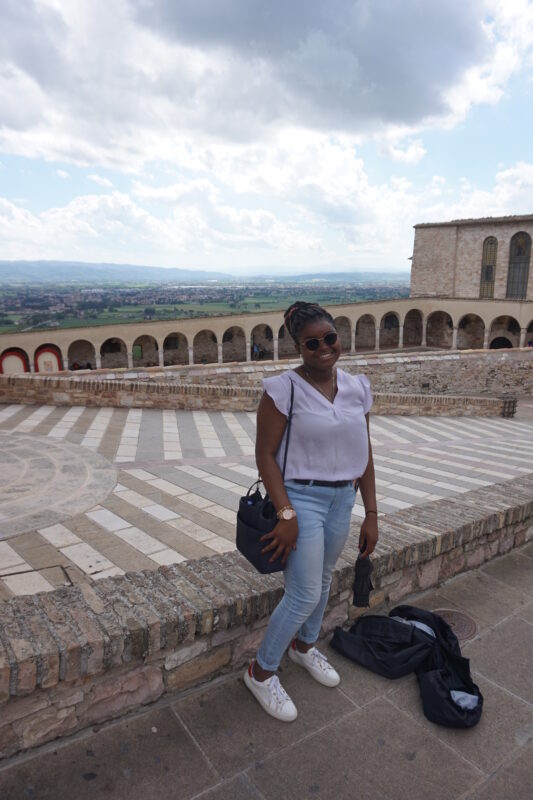 Iyekekpolor was a member of SMC One program the Gilson Seminar in Faith and Ideas during her first year, and traveled with the class to Assissi.

Many weeks the posts will be linked to a theme. As the project launches this week, for example, the post will be tied to the Week of Prayer for Christian Unity, which has just concluded. The following theme will be February’s Black History Month, and Iyekekpolor and Student Life Associate Emma Graham have a lengthy list of suggested themes on how to celebrate the community.

It’s no surprise this dynamic idea was created by a dynamic student. Double majoring in neuroscience and psychology, with a minor in French, she was a participant in her first year in St. Mike’s SMC One program the Gilson Seminar in Faith and Ideas. Iyekekpolor also works part-time as a Student Life programming assistant, splitting her time between handling social media posts and helping to plan events with various clubs on campus. It was her idea, for example, notes Graham, to plan Season it Just Right!, two February workshops on African and Caribbean cooking to mark Black History Month.

When she’s not engaged in school or work, Iyekekpolor also belongs to an a cappella singing group through the Faculty of Music and is preparing for a big competition. Her long-term goal is a career in medicine.