The sweet aroma of incense filled the summer evening air around Windle House on Tuesday, July 25 as some four hundred scholars, parishioners, and other interested parties stood for a liturgy of blessing, thanksgiving, and rededication of the Elmsley Place mansion for the use of its new residents. With much celebration, the Metropolitan Andrey Sheptytsky Institute of Eastern Christian Studies was, at last, at home. 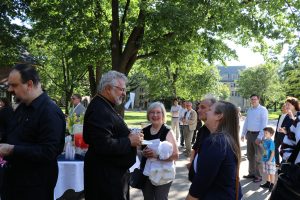 The event began with a 5:00 PM garden party on the lawn and plaza between Windle House and Brennan Hall. At 6:30 a ceremony of blessing and thanksgiving involved four presiding hierarchs—Thomas Cardinal Collins, Archbishop of Toronto and Bishop Borys Gudziak, Eparch of Paris, among them—in the formal rededication of Windle for the use of the Institute. At 8:00 PM, Bishop Gudziak delivered an address in Sam Sorbara Auditorium that brought the history of the Institute into focus through the themes of the life of its namesake, Metropolitan Andrey Sheptytsky. Metropolitan Sheptytsky was a leader and nonviolent activist in the Greco-Catholic Church in Europe through the world wars who helped to shield more than 150 Jews during the Holocaust.

With the arrival of the Institute, St. Michael’s gains a research centre that was originally founded with the hope of helping to resurrect the Church in Ukraine, Father Andriy Chirovsky said. Chirovsky founded the Institute in Chicago in 1986.

“It was based in North America, but with the idea that if we can be alive here, then we can help our Church in Ukraine. But we can also help other Eastern churches,” Father Chirovsky said, “Both Catholic and Orthodox.” At the time of the Institute’s founding, the Ukrainian Catholic Church was still an illegal institution under the laws of the U.S.S.R., as it had been for almost half a century. In 1939, there were 3,000 priests; 45 years later, there were only 300, with an average age of 70.

The Institute played an essential role in providing theological instruction in the late days of the Soviet Union and the early days of Ukrainian independence, with a number of professors associated with its founding spending their “spring breaks and summer vacations” teaching in Ukraine, as Institute director Father Peter Galadza said. Today the number of priests in the Ukrainian Catholic Church has been restored to its pre-war levels.

“Three concentric circles represent both our expertise and our interests,” Father Chirovsky said. The first is “the tradition of the Church of Kiev.” Kiev is the capital of Ukraine and the place where the Kievan Church—which Father Chirovsky considers to include Catholic and Orthodox Ukrainians, Belarusans, and Russians—came into existence in 988. The second circle includes “everyone who uses the Constantinopolitan tradition—otherwise known as the Byzantine tradition.” All other Eastern Christian churches comprise the third concentric circle. “We want to be a place that allows the Copts to tell their story at one of the great universities of the world—a story of martyrdom, a story of perseverance,” Father Chirovsky said. Coptic Christians get crosses tattooed on their wrists to be “identifiable [as Christians] at any time,” including to those who would persecute them for their faith.

The Institute’s work in both academic theology and the spiritual and liturgical practices of the Eastern Churches will enable it to serve a surprisingly diverse community in Toronto, Cardinal Collins told me. A member of the Vatican’s Congregation for the Eastern Churches, the St. Michael’s chancellor helps to maintain the Roman Church’s relationship with its Eastern counterparts. Most of the 22 churches in the Catholic Church are represented in the Toronto area, and “many of [them] are facing persecution” around the world. The Institute’s ministry to these communities also reflects “the richness of the Catholic Church, the diversity and the beauty. It’s just so important to have.”

Bishop Gudziak echoed the Cardinal’s sentiment, describing the Institute as “the window through which North America, especially Canada, can see the Eastern Christian world in all its diversity.” Eparch of Paris, Bishop Gudziak presides over Eastern Catholics across a large swath of Western Europe while also serving as the President of the Ukrainian Catholic University. His relationship with Fathers Chirovsky, Galadza, and others involved with the Institute began decades ago and continued through a joint effort to restore the Church in Ukraine, which had “been stripped of its infrastructure, its institutions, its capacity to theologize in an academic way.” Bishop Gudziak descbribed the Sheptytsky Institute’s work in the early 1990s as being “indispensible for creating the parameters of theological life in Ukraine.” “My hope is that the community here at the U of T and at the University of St. Michael’s College, [and] the Ukrainian and Catholic [communities] of Toronto, make best use of this special opportunity,” Bishop Gudziak said.

The Eparch then spoke with great feeling about the life of Metropolitan Sheptytsky, “one of the greatest churchmen of the last hundred years.” He lived through the administration of 7 governments while shepherding a relatively small church of “3 to 4 million members” in a “distant, poor corner of the Austro-Hungarian Empire.”

“Because of who Sheptytsky was,” Bishop Gudziak continued, “[that church’s] members and its communities are spread from Siberia to Egypt, from Western Canada to Argentina, across the entire globe.”  He rooted the Institute’s history in the life and ministry of its founder, with a role in serving the Ukrainian Catholic Church even as it serves the world. The “Sheptytsky legacy testifies to the fact that God wins.”

“Don’t waste this opportunity,” Bishop Gudziak told the scores of people from Canada, the United States and Ukraine gathered in Sorbara Auditorium. If the St. Michael’s and University of Toronto communities “take this encounter seriously” and “join in this beautiful dance,” Bishop Gudziak promised that “incredible things will happen.” A standing ovation met the conclusion of the bishop’s remarks, and with the end of the evening’s program, the life of the Sheptytsky Institute was christened for a new era in the University of St. Michael’s College in the University of Toronto.

Martyn Wendell Jones is a writer in the Office of Communications at the University of St. Michael’s College.