“Teaching is her Passion”: Inside the Classroom with Dr. Callie Callon

Home / News & Updates / “Teaching is her Passion”: Inside the Classroom with Dr. Callie Callon

“Teaching is her Passion”: Inside the Classroom with Dr. Callie Callon 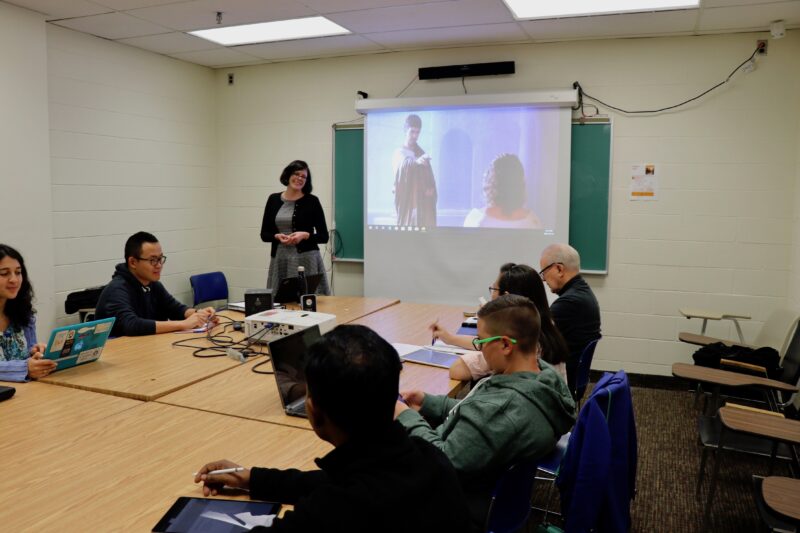 Ask Dr. Callie Callon about her field of study and she launches into an animated anecdote about insults in the ancient world.  First she breaks into a grin and then an outright laugh as she details how St. Jerome suggesting that Pelagius fought with “a pointy head” was really an exquisite 5th-century dig at the latter’s character. It’s a laugh that indicates just how much this professor enjoys her work.

Dr. Callon, a New Testament scholar now teaching at the Faculty of Theology, is also an expert in ancient physiognomy, looking at how early Christians used appearances to praise or impugn others. Her book, Reading Bodies: Physiognomy as a Strategy of Persuasion in Early Christian Discourse, was published earlier this year by Bloomsbury Publishing.

The pointy head reference, she explains, was really designed to allude to a wrestling position, as the common thinking about wrestlers in Jerome’s time was that they had brute strength but moral shortcomings. One of Pelagius’s moral shortcomings? He had criticized some of Jerome’s writings. (Subsequently, of course, Pelagius was deemed a heretic at the Council of Carthage in 418 A.D. over his thoughts on original sin.)

“In some situations Early Christians could capitalize on what was held to be a deficiency in the personal appearance of an opponent in order to persuade an audience of his deficiency in character,” Dr. Callon explains. With Jerome and Pelagius at odds over theology, the former took to attacking physical characteristics of the latter to defame and undermine his philosophy.

The delight Dr. Callon finds in her subject area, whether interpreting the nuances of early Church writing or the depths of Scripture, has won her fans among her students.

“You can tell that teaching is her passion,” says doctoral student Min-June Kye, who first encountered the professor in her The Parables of Jesus class, and who uses words like supportive and innovative to describe her as a teacher.  “She clearly enjoys what she’s doing, including learning from her students, she’s incredibly smart, and her objective is knowledge, not career.”

When asked to elaborate, he cites things like Dr. Callon’s Greek word of the day to amplify readings and broader horizons, her use of humour in lectures, or her timely response to emails, with detailed answers demonstrating she has read the entire message thoroughly.

“She also offers detailed attention on papers – and she’s always encouraging in the areas that need attention,” he says.

Modest about her students’ appreciation for her teaching style, Dr. Callon describes herself as “student-focused,” and says she tries to get a feel for her students on the first day of class because each group is unique.

“A third of the way through the course I ask students to write one thing that is going well (about the class) and one that they would change and hand them in – anonymously — because there are so many different learning styles,” she explains. “That way I can address areas that could help students better engage.”

Dr. Callon found her subject area of interest by accident.

“An original interest in contemporary gender theory and gender performance let to an interest in the way the body and gender were understood and interpreted in antiquity,” she explains.  “A significant component of ancient physiognomic thought was concerned with detecting what it deemed ‘gender slippage’ in bodily comportment.”

This year, she is teaching The Gospel of Matthew, The Life and Letters of St. Paul, and Feminist Interpretations of the Bible for the Faculty of Theology. New to her teaching schedule this year is an undergraduate course, Women and Christianity, which will run in the Winter semester. As described in the syllabus, the course will explore “what Pope John Paul II, among others, called the ‘feminine tradition’ in Christian life and thought.”

“Research-informed teaching is a defining feature of a University of Toronto undergraduate program,” says Professor Randy Boyagoda, Principal of the College and Director of the Christianity and Culture program, in which Dr. Callon is teaching her course. “The College, the program, and above all our students are fortunate to have a scholar of Dr. Callon’s calibre drawing on her active work in this area and sharing that in the classroom.”

Faculty Dean Dr. James Ginther says he’s delighted to see Dr. Callon’s teaching talents shared with the undergraduate division, describing her as a “wonderful ambassador” for theology, and as someone who will offer students a top academic experience while remaining approachable and able to answer questions undergrads might have if they’re pondering graduate studies.

That skill has already been demonstrated. Just ask Min-June Kye.

Dr. Callon is “one of the reasons I continued my studies,” he says simply.