With an estimated 1 in 110 people worldwide now forcibly displaced, experts from multiple disciplines gathered on campus recently to address the role of the Church in the growing crisis of global migration.

The Faculty of Theology at the University of St. Michael’s College co-hosted of The Church and Migration: Global (In)Difference?,  one of the largest conferences ever held at St. Mike’s. The three-day event  sponsored by the Dominican Institute of Toronto was a collaborative effort, co-organized by colleagues from St. Mike’s, Regis College, Emmanuel College, Victoria University and Trinity College.

The conference, which ran June 25-27, spanned four college campuses, hit its maximum attendance with 155 attendees, and saw more than 70 presenters from 14 countries, representing six continents.  Panel topic were diverse, ranging from Jesus the Migrant: Matthew 2.13-15 as a Source for Migrants’ Hope and Hospitality to Others Rooted in an Ecclesiology of the Baptized People of God to Pope Francis’ Four Verbs to Meet the Challenge of Migrations and Decolonizing the Category “Religion”.

“The conference brought together academics, practitioners, and public and ecclesial leaders,” said Dr. Michael Attridge, one of the event’s organizers.

The interdisciplinary nature of the forum gathered not only “theologians and ethicists… (but also) colleagues from history, geography, political science, law and anthropology. It was the largest interdisciplinary conference ever hosted by the Faculty of Theology, University of St. Michael’s College,” noted Dr. Attridge, who teaches courses in Systematic Theology, Vatican II and Christology at St. Mike’s.

In his remarks to open the conference, St. Michael’s Chancellor Thomas Cardinal Collins cited “the powerful image of Jesus, Mary, and Joseph, as refugees, forced to leave their homes,” noting that Bishop Michael Power’s work in the fever sheds of Toronto with Irish famine refugees marked the beginning of close to 200 years of the local church accompanying people fleeing war, famine, poverty, persecution and natural disaster.

Georgetown theologian Dr. Peter Phan, who also spoke at the opening plenary session, echoed the Cardinal’s remarks, suggesting that migration is a hallmark of the Church. Because migrants present as the other they should be a clear reminder to us that we find the face of Christ in all, and thus reach out with solace and support to those on this perilous journey. It is also essential to remember that hope of a better life motivates migrants and refugees, Dr. Phan noted, and as people who believe in the hope of the Resurrection, we should be called by faith to respond.

Dr. Aldo Skoda, of Rome’s Scalabrini International Migration Institute, shared some hard truths at the opening evening session. He cited a statistic that currently one out of every 110 people worldwide is forced flee home because of reasons such as poverty or war. In the South Pacific, for example, some have migration forced upon them because the islands they once called home are now submerged by rising ocean levels. Dr. Skoda added that one of key factors further complicating mass migration is indifference on the part of wealthier, safer nations, countries with the ability to respond but whose citizens often lack the will. He challenged listeners by citing such realities as the fact that while migration is a transnational issue, each country has its own policies and procedures, further complicating an already complex issue.

With the court of public opinion often against them in their desired destinations, running from poverty, and often lacking education, “migrants are poor of rights and powers but migrants have dignity,” and this is one of the areas in which the Church can make a difference, Dr. Skoda said.

“The gospel is not only a message to help us analyze a story, but it remains incomplete without reflection on what kind of Church we want to be,” Dr. Skoda said.

While conference attendees knew they would hear challenging presentations, many participants were also surprised in the presentations they heard. For example, statistics repeated more than once shook oft-heard assumptions about which countries host the most migrants.

“The critique of the western discourse around the immigration and refugee ‘crisis’ was eye-opening, especially when one considers that refugee host countries most affected are not in the West but include Turkey, Uganda, Pakistan, Iran,” explained conference organizer Dr. Darren Dias, OP, who teaches Trinity, sacraments and Jewish-Christian dialogue at St. Mike’s. “These are the countries that have the most refugees – not Germany, USA or Canada.” 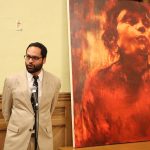 ThM student Fiona Li, who was both a panel moderator and conference attendee, found the event to be a powerful reminder of just how broad the issues are surrounding migration.

“We often think of the Mexicans, the Syrians, and refugees as migrants, but we forget about other types of migrants, such as women who migrate to another country in hopes of marrying someone,” Li said.

“Dr. Christina Lledo Gomes [Charles Stuart University, Australia] presented a paper about Filipina migrants in Australia, and how the stereotype of the ideal East Asian woman really affects how people view East Asian women, and how vulnerable women … are in a foreign country. It was a reminder to be aware of all types of migrants, their contexts, and how we can help them.”

One of the conference attendees was Dr. David Sylvester, who took up his duties as St. Mike’s president later that week, on July 1.

“I am delighted to see first-hand the leadership role that St. Michael’s faculty have played in planning, presenting, and hosting this important international conference in partnership with our colleagues across campus,” Dr. Sylvester said. “If anyone has any doubts about the relevancy of Catholic higher education today, they need look only at this gather of distinguished academics from around the world who have come together across borders and faith traditions to discuss one of the most pressing ethic and social issues of our day.”

Conference attendee Dr. Agnes Thomas, who is the executive director of Catholic Crosscultural Services, a local agency that offers extensive services to newcomers in the greater Toronto area, called the conference “a timely and critical conversation.”

“I am encouraged that the Church and the theologians in our midst are engaged in discussing challenges, opportunities, and the the positive and negatives of the past role the Church played with regard to immigration and refugee settlement, while accepting the fact that in the past we have not always been gracious to the ‘stranger’ in our midst.”

The migration conference was the 12th conference to stem from the work of the Ecclesiological Investigations International Research Network, an organization created to bring together worldwide research and debate in ecclesiological matters.

“We live in a time when the migration of peoples (the journeys and displacement of which, for the vast majority, have been forced upon them by external circumstances), has never been a situation of greater urgency,” said Dr. Gerard Mannion of Georgetown University, who is a founding member of EI. 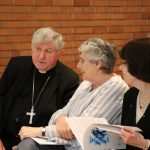 “This makes it imperative that churches, faiths communities and all people of good do all they can, relative to their situations and resources, to explore the root causes of such migration, the implications and outcomes of mass human movement and potential strategies and courses of action to help alleviate the most acute situations readily, as well as ensuring just and equitable policies and laws are implemented both within and across nations to safeguard the rights and futures of all migrants, refugees, displaced peoples and itinerant peoples,” said Dr. Mannion, who stressed the importance on ongoing conversation on what he labelled one of the most pressing challenges of our times.

“We see in the Other and through-otherness the reflection of the wondrous ground of being that Christians call Wholly Other, the God who is unity in diversity.”