Charles Foran is an alumnus of the University of St. Michael’s College, whose journalism has appeared in publications around the world. He is an adjunct professor in the English Department at the University of Toronto as well as the CEO of the Institute for Canadian Citizenship. On June 15, 2018, he delivered the commencement address to the St. Michael’s class of 2018 at Convocation Hall. 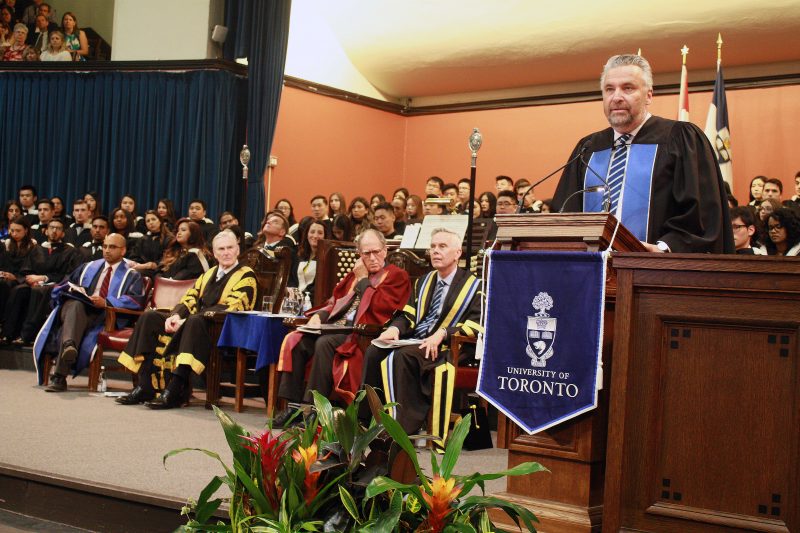 A few years ago the British novelist Zadie Smith was asked by a CBC interviewer about the purpose of art – what art can achieve. She replied that Canada knew the answer to this question already. It’s right there, she said, on your currency.

The answer, according to Zadie Smith, was then in very small print on our twenty dollar bill. It was a quote from the Quebecois novelist Gabrielle Roy.

“Could we ever know each other in the slightest,” Gabrielle Roy asked, “without the arts?”

Asked if she agreed with the sentiment, Zadie Smith was still more direct. This is a paraphrase of her reply, drawn from my memory of the interview: We need art, she said, to remind ourselves that there are other people around us.

Many artists, and certainly most novelists, have their own variation on the insight: that art helps humans know – or perhaps know better — other humans. That it reminds us we are surrounded by creatures with identical DNA and story-lines, and that being mindful of these truths, and acting upon them however and whenever we can, is good for our souls, and for our species.

Apparently we aren’t particularly good at this, or even designed by nature to sustain the effort. We go about our business in proximity to people who are doing the exact same things in the exact same places with the near exact same hopes, intentions, yearnings, anxieties, joys and sorrows – and yet we don’t really want to connect with them, or even quite designate them as being there alongside us.

By now you might well be saying: Seriously? We don’t know the people right around us? At Convocation Hall today, we’re side by side with 650 fellow grads. On the subway on any given day, we are too close by half to significant numbers of fellow Torontonians. We certainly know our own families and friends, lovers and spouses. And the people at our church, in our yoga class, at the protests we attend and in the clubs where we dance.

And what about our digital communities? So many friends on such a range of platforms. We know them and they know us.

You might well be saying all this. And I would respond: I get the conceptual challenge here. This is a gnarly, difficult insight, one not, as I admitted before, immediately self-evident.

It is also a truth about the world that comes more and more clear as you age, and as evidence of our disregard for each other becomes overwhelming. Worse, the disregard isn’t always, or even often, born of straightforward cruelty or malice.

Rather, it seems to be part of our condition. Call that condition fallen-from-grace, if you want. Or just call it human.

Here is now it sometimes feels being an adult. You’re driving along a fast highway in a fast car. Like so many on the road, you’re on your own. It’s a clear day, no snow or sleet or rain or fog, and there is decent spacing between vehicles, allowing you to safely look left, look right, for split seconds.

In the next car you see a solitary driver singing along to ‘Single Ladies’ at the top of his lungs, and doing that head and hands dip move, like Beyoncé in the video. You see a woman speaking passionately into either her speaker phone or at the Irish setter gazing back at her from the passenger seat.

You see a driver eating noodles with chopsticks, and spilling them onto the steering wheel, and someone else pretending not be texting on the phone in his lap, even though the logical alternative is that he is fondling himself.

You see people looking too drunk or stoned to be doing 120 clicks on the highway anywhere near you.

You see people sobbing and wiping their nose with a sleeve.

You see people looking so sad and forlorn you worry they are going to do something rash, and hope they take the next exit ramp so you don’t have to witness it.

You see people who look a little like your sister-in-law from your first marriage, the one you used to watch “The Batchelor” with and howl with laughter, and who you kind of miss more than you do your ex-husband.

Or the employee you let go when you were boss even though he had two kids and a mortgage and was a good guy, just not the right skills set anymore.

Or your sister’s best friend who you had a crush on throughout university, and still think about from time to time and believe in your deep heart’s core – don’t tell this to anyone! — you could have made happy.

Or your best buddy from high school, a messed up kid from a messed up home, none of it his fault, who never graduated and who you lost touch with, and last heard was living rough in the East End of town.

Or you see someone who looks like a three-decades older version of own Dad, who you never forgave for leaving your Mom, and is now an old man somewhere, bitter and alone. And to hell with him still.

Or you see someone who looks – is this possible? – like a three-decades younger version of yourself: thinner, brighter eyed, bursting with crazy dreams. And you think that him, above all the others, you don’t want to meet.

But you’re all bound for different destinations, and you’ve no safe way of communicating any desire, however vague, to connect. Anyways, you don’t actually know these people. They just remind you of someone you do, or did, know. So you drive on, single-passenger, another day done.

That is how it sometimes feels being an adult.

Let me add this: the failures in my own life that haunt me most are nearly all related to my deciding to opt out of connections with people I could have, should have, stayed connected with, or simply made greater effort to acknowledge as being around me, part of me even. Certainly worthy of my attention and solicitude. Certainly that.

I am not talking about people in cars on highways. I am talking people walking right here in this neighborhood, in this city. People who aren’t, frankly, as easy to love as dogs or cats and who can’t truly be erased by a social media block. I bump up against them all the time. Differing happenstances aside, their struggles and sadnesses are identical to my own, as are their looming fates.

I should want – no, I should need – to know more about them. I certainly shouldn’t find anything about them repellent or scary or – for sure – less human.

In short: everyone has trouble with this business of being in close, constant proximity to other people, and not being sure how to behave. As I said before, it appears to be our condition.

But it is essential to try, and then try again, to deny that condition the stature of a grim but unassailable truth about the world. Essential for our health, and for our spirits. Essential too, by the way, for our politics, which should reflect the collective better angels of our natures – not those other ones.

How to try being mindful? There are different ways, and luckily they call upon qualities we humans also naturally possess: empathy, sympathy, deep emotion. Above all, we have our imaginations. Once imaginatively engaged it is amazing how close to connected we can get — if only for a moment.

Which brings me back around to the role of art and, in particular, to the art form best suited, I believe, to helping us know each other “in the slightest,” as Gabrielle Roy hoped we might. That would be literary fiction, and for maybe nine out of ten practitioners it is the ethical job at hand – to make you, me, us, more mutually aware.

Now, you can go your entire life without reading a novel and still being a fine person. You can. But it would be a pity. Novels and stories make it so easy, so natural, to dwell inside the lives and minds of others, and to learn how they think and dream, hope and pray.

Anyways, the right methods will present themselves in the years ahead, especially for those of you who go seeking them. All I want for you, starting with commencement this afternoon, is that you start a practice of thinking as regularly as you can about our shared predicament.

Being mindful of it, keen to do whatever small things you can to contest it, constitutes a good, honorable way to live. Even better, it is certain to make your soul sing, at least as loudly as the guy belting out Beyoncé alone in his car.