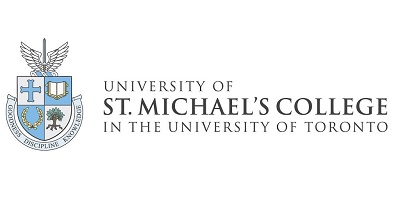 Convocation is a time not only for celebrating memories and friendships, but also the academic and extracurricular achievements of the graduating class. This year, almost 150 graduating St. Michael’s students received medals and named awards. Celebrate their accomplishments with us as the Class of 2020 enters the St. Michael’s alumni family.

In conjunction with the family of the late Professor Lawrence E. Lynch, the Principal’s Medal was created in 1978 to recognize the almost lifelong association of Professor Lynch with St. Michael’s College, and also to mark his 25th wedding anniversary.

Professor Lynch served as the College Principal from July 1976-June 1981.

The medal is given annually to a graduate who has made a distinctive contribution to life at the college and who upheld the practice of Catholicism proper to a university community.

This year’s recipient of the Principal’s Medal is Rose Wang.

Sylvia and Raymon Santin, St. Mike’s alumni, established the Marina Santin award in honour of their late daughter. During her time as a St Mike’s Marina contributed significantly to the life of the College and to the University through her work as an Arts and Entertainment columnist for The Mike, staff photographer for The Newspaper, a Coordinator of the 1991 St. Michael’s Orientation, and by her presence at and support of College and University events and programmes.

The Marina Santin Award is presented annually to a female graduate who has distinguished herself by an active and constructive involvement in the life of the college. Recipients exemplify the Christian ideals of joyful engagement in life, openness to others, service to the community, and responsible leadership.

This year’s recipient of the Marina Santin Award is Sasha Hellwig.

The Sir Bertram Windle C.A Graduate Scholarship is awarded to a student with an excellent academic record who will be entering a liberal arts graduate program at the University of Toronto in the September following graduation.

This year’s recipient of the Sir Bertram Windle Graduate Scholarship is Isabel Armiento.

The W.B. Dunphy Medal was created in 1991 to honour Professor William Dunphy, who served as College Principal from 1981-1991.

Principal Dunphy was particularly concerned that university life should not be separate from the life of the wider community.

The medal is awarded annually to a graduate who has been most successful in combining excellent academic achievement with sustained commitment to volunteer service in the wider community.

This year’s recipient of the W.B. Dunphy Medal is Zara Ahmad.

The Father Henry Carr, CSB Award, named in honour of a Basilian father who helped shape this institution and who served as president and superior at St. Michael’s from 1915 to 1925 is presented to a graduate who has made an outstanding contribution to the University of Toronto in athletics, academics, leadership, or student life.

The recipient of this year’s Father Henry Carr, CSB Award is Hodan Mohamud.

Father Robert Madden was a much admired professor, chaplain and rector at St Mike’s who served as the director of alumni affairs in his retirement. The Father Robert Madden Leadership Awards are presented to students who have made significant contributions to the University of St. Michael’s College community by demonstrating leadership, cooperation, and solidarity in student-run organizations or community endeavours.

The recipients of this year’s Fr. Robert Madden, CSB Leadership Awards are:

The recipient of this year’s University of St. Michael’s College Young Alumni Award is Samuel Gearing.

Graduation Awards by Merit and Program

Alberto Di Giovanni, 7T1 and his wife Caroline Morgan Di Giovanni, 7T0 have a long and close association with the University of St. Michael’s College. They met here as students and have stayed involved as alumni. Three of their children (Annamaria, Carlo and Franca) as well as nieces and nephews have followed in their footsteps and graduated from St Mike’s. Alberto and Caroline have endowed scholarships and an annual Dante lecture to demonstrate their appreciation for their experiences here and to encourage St Mike’s graduates to develop life-long connections with their alma mater.

Four Alberto and Caroline Morgan Di Giovanni Scholarships are awarded each year to St. Michael’s College students. Earlier this spring Di Giovanni scholarships were awarded to students participating in the Gilson Seminar in Faith and Ideas.

Today we are recognizing Alberto and Caroline Morgan Di Giovanni Scholarships for graduating students who have achieved the top marks in Italian Studies and have demonstrated leadership and community spirit on the St. Michael’s College campus; and in the community at large.

The recipients of this year’s Alberto and Caroline Morgan Di Giovanni – Centro Scuola Scholarships are Julia Volpe and David Adamiszyn.

This award was established by the Family and Friends of Mr. Tommaso Serrao, who had a great love and passion for Italian literature.

The award is presented to an outstanding graduate who has excelled in the study of Italian.

The recipient of this year’s Tommaso Serrao Award is Janet Marta.

The Mercier-Knowlton Prize for Philosophy in Christianity & Culture

While studying at St Michael’s College, William Leo Knowlton, class of 1927, developed a deep love of philosophy that never left him.

In 1999, he made a generous donation to St Michael’s to establish an endowed lectureship in Philosophy and Theology.

This gift also enabled the College to re-institute the Mercier Prize, which had been established in 1924 in honour of Cardinal Mercier and his work relative to the philosophy of St Thomas Aquinas.

This award is given to the student with the highest CGPA in Philosophy and Christianity & Culture.

The recipient of this year’s Mercier-Knowlton Prize for Philosophy in Christianity & Culture is Sasha Hellwig.

After graduating he remained an active alumnus of the College, serving on the USMC Senate for a number of years and on the Library Committee.

His family established this award to honour his love of literature and to celebrate their continuing association with St. Mike’s.

The recipient of this year’s James O’Brien 5T0 Book Award is Danielle Nassr.

The College Gold Medals are awarded to graduating students with the highest cumulative grade point average in Arts, Science, and Commerce.

The recipients of this year’s College Gold Medals are:

College Silver Medals are awarded to all other graduating students who have a cumulative grade point average of at least 3.7.

The recipients of this year’s College Silver Medals are: