The itinerary for Dr. Dennis Patrick O’Hara’s final working trip before his retirement begins this summer couldn’t haven been more appropriate. The Faculty of Theology professor returns this week from South Korea, where he offered a congratulatory address to the founding meeting of the Korean Thomas Berry Association (KTBA).

It’s a trip that has brought the ecotheologian full circle, as Dr. O’Hara was first influenced by Berry’s writings while working on his graduate studies, leading him to specialize in theology and ecology. Berry’s influence and inspiration have remained strong throughout Prof. O’Hara’s teaching career, and over the years he has emerged as a world leader in Berry’s work, teaching hundreds of students and supervising multiple theses in ecotheology and ethics. Many of those students come from South Korea, where Berry has a strong following, expressly because of Dr. O’Hara’s reputation and research. 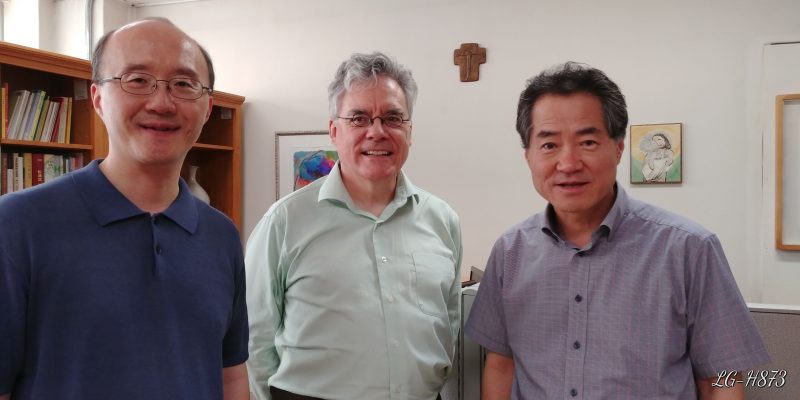 Dr. O’Hara with grads Fr. Baek Jong Yun, director of the Eco-Ministry for the archdiocese of Seoul, and Fr. Lee Jai-Don

Dr. Berry (1914-2009) was a Passionist priest strongly inspired by French philosopher Teilhard de Chardin. He called on science, Judeo-Christian tradition and a wealth of wisdom from various spiritual traditions to propose ways in which to better understand and serve ecological consciousness.

Dr. O’Hara points to the new Berry association’s mission statement to explain the resonance Berry has with many Koreans. The statement notes not only that Fr. Berry’s work can offer “a new vision to Korean society which is suffering the side effects of industrialization,” but also that his “thought, because of the significant influence of Asian philosophy, is readily understandable in the Korean context.” 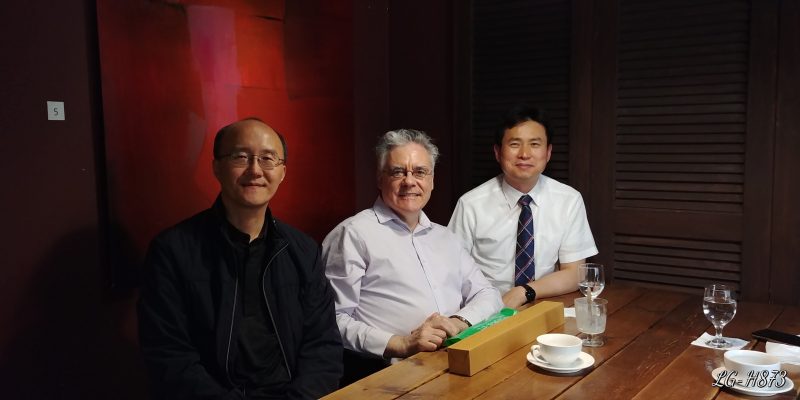 As Koreans have come to know Dr. Berry’s thought, often that introduction – and then further education — have come via Dr. O’Hara and his work as director of the world-renowned Elliott Allen Institute for Theology and Ecology (EAITE). Founded here at the Faculty of Theology by Passionist Fr. Stephen Dunn, the EAITE is an interdisciplinary institute that brings together various branches of theology – e.g., ecospirituality or gender justice – with science and humanities in ways to benefit both people and the rest of the planet. Dr. O’Hara succeeded Fr. Dunn as director of the institute in 2001 and he has remained a key influence as the EAITE has continued to grow as the foremost place to study the thought and implications of Dr. Berry’s work.

“We not only teach (Berry’s) work but give it a solid theological foundation and interpretation,” Dr. O’Hara says simply. “This is unique among the centres that study Tom’s works.”

At a traditional Korean meal following the launch of the KTB, Bishop Timothy Yu Gyeong Chon, social ministry vicar for the Seoul Archdiocese, chatted with Dr. O’Hara to let him know not only that he’d met Dr. Berry once but that he’d also attended one of O’Hara’s classes while visiting Toronto. Then he sang the praises of the EAITE. While in Seoul to help launch the local Berry association, Dr. O’Hara also delivered a talk to 50 seminarians at the Catholic University of Seoul, and another sponsored in part by Kyung Hee University. He also met with many of his former students and their associates, discussing local environmental concerns.

Dr. O’Hara’s significant profile is all the more impressive given that ecotheology is his second career.  Prior to theology, he was a chiropractor and naturopathic doctor, both as a practitioner in private practice as well as an educator at colleges for each of these professions. He has also served as a consultant and facilitator for the Natural Health Products Directorate of Health Canada, drafted a description of the naturopathic profession for the World Health Organization, and written the summative report for the 2006 World Health Organization International Consultation on Phytotherapy held in Milan, Italy.

He regularly delivers popular and academic lectures in Canada, the United States, and Korea on ecotheology, ecospirituality, ecoethics, and integral ecology and human health.

Two days before his retirement starts, Dr. O’Hara will facilitate a special screening and discussion of An Ecology of Mind: A Daughter’s Portrait of Gregory Bateson, an event that’s part of an international conference on “Media Ethics: Human Ecology in a Connected World” hosted in partnership with the EAITE and the University of Toronto Faculty of Information. The screening and panel discussion, including an interview with Nora Bateson, takes place June 28 at 7:30, at the McLuhan Centre, 39A Queen’s Park Crescent E.

Dr. O’Hara retires from the Faculty of Theology June 30 of this year. He will be missed!