Fast Forward: A Look Ahead with Student Athlete Kyle Potts

A Message About the Coronavirus

Fast Forward: A Look Ahead with Student Athlete Kyle Potts As the Varsity Blues men’s hockey team went on a 14-game winning streak this winter, first-year St. Mike’s student athlete Kyle Potts was beginning to come into his own. The rookie forward and Ontario Hockey League alumnus has become a power play asset for the Blues, scoring the fourth goal during their hard-fought 6-5 win against the Ryerson Rams that kicked off Toronto’s remarkable winning streak, a feat they last accomplished in the 1973-1974 season.

“It was a wild game with five lead changes,” the Oakville native says. The overtime win provided a morale boost that propelled the team into a string of victories. Potts added to the team’s point tally in six of those games, contributing the game-winning goal in a 6-2 win over the Brock Badgers. He notes, “I don’t think anyone really expected us to win 14 in a row.”

The Varsity Blues are now at the top of the Ontario University Athletics Western Conference standings; Potts considers the Queen’s Cup and a trip to nationals to be in reach, which could open a new chapter in the history of the Blues hockey program. The team won its last national title in 1984.

The prospect of becoming part of an athletic legacy is one of the things that originally attracted the Humanities major to St. Michael’s when he was considering the University of Toronto. “The history of hockey at St. Mike’s is what originally drew me,” Potts says. “I just knew it was the right place for me.”

The Double Blue hockey tradition at St. Michael’s goes back to the early days of the institution, when Basilian priests could be found on the ice coaching and competing with students. With a lineage that includes Hockey Hall of Fame inductees and Olympic team coaches, hockey at St. Michael’s has always been a strong source of community for student athletes, and continues to provide a firm grounding for those who are new to university. 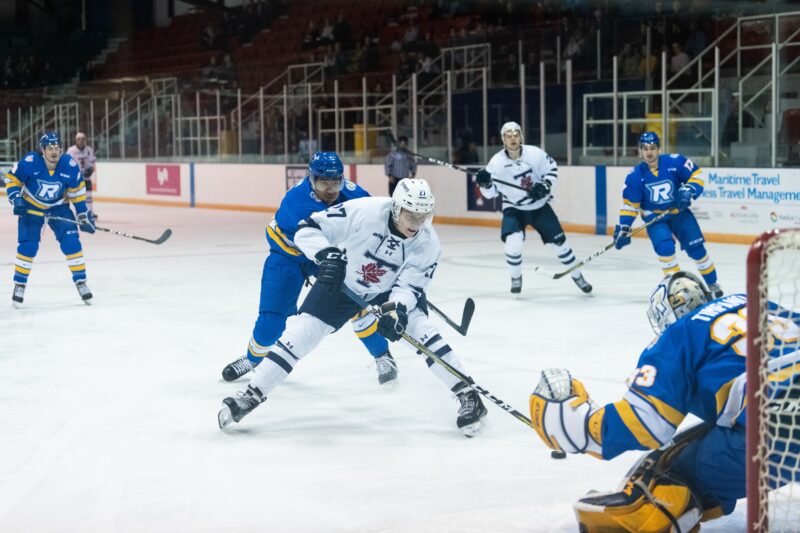 During a hard-fought 6-4 win against the Ryerson Rams, Potts helped to catalyze the Blues’ 14-game winning streak this winter. Photo courtesy of the Varsity Blues.

“It’s like a brotherhood,” Potts says of the Varsity Blues team, which includes fellow St. Michael’s students Curtis Harvey and Frederic Foulem. “We all stick up for each other.”

Potts made his transition to university several years later than most U of T students, as he played for three years in the OHL after graduating from high school. He also participated in the New York Rangers training camp in September 2018.

Managing a full load of classes in addition to a rigorous six-day-a-week practice schedule has presented challenges beyond the ones Potts knew from his life in the Junior Hockey system. He knew support would be important in order for him to make a successful transition.

“I met with some of the people in the Registrar’s Office before enrolling at St. Mike’s,” he says, noting that they helped make his transition to university easy for him. “They seemed like a great support system for me, and it was the right fit.”

“Kyle, like many of our student athletes, faces the pressure of high-level performance in the athletic and academic arenas,” St. Michael’s Registrar and Director of Student Services Giancarlo Mazzanti says. In view of these pressures, the Registrar’s Office makes sure to connect student athletes like Potts with both an academic advisor and the Student Services team at St. Michael’s, which includes learning strategists, accessibility advisors and Campus Ministry.

Potts also credits Head Coach Ryan Medel, Assistant Coach Andrew Dovey and other members of the Men’s Hockey coaching staff for helping to integrate new players into both the team and university life more generally. “They do a really good job around the clock looking out for us and supporting us,” Potts says. “It’s good because it feels like you’re never alone.” 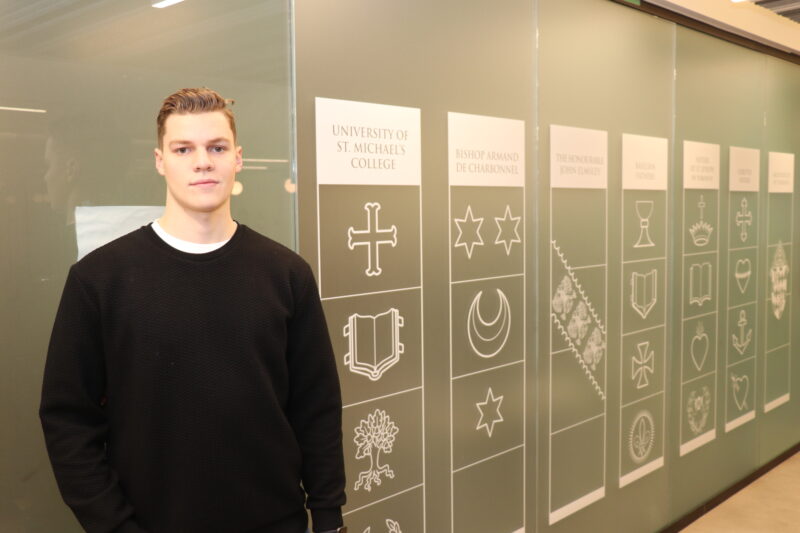 Potts appreciates the support he’s received from both his coaches and the Office of the Registrar at St. Mike’s during his transition to university life.

Despite the intense rigours of both OUA competition and university-level studies, Head Coach Medel considers Potts to have made a successful transition into his Varsity Blues career. “Kyle skates well for his size and has strong offensive instincts,” he says. “He’s solidified a spot on our power play and has been a big part of our success overall.”

“We play the right way as a team,” Potts says. “I think we have the team to go there.”

Following wins over the weekend against the Windsor Lancers and Wilfrid Laurier Golden Hawks, the 19-3 team will next face off against the Western Mustangs in Varsity Arena on Wednesday, Jan. 22 at 7 p.m. Fans can cheer on the Blues and catch updates in real time at the Varsity Blues Twitter account, and watch the game live at OUA TV.