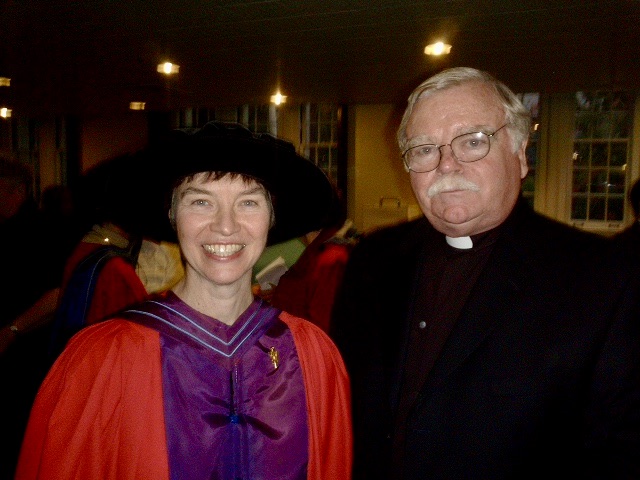 The University of St. Michael’s College is mourning the death of former Faculty of Theology Dean Michael Fahey, S.J., a man described as a perceptive theologian, an astute mentor and an exemplary leader and administrator.

“I was saddened to hear of the passing of Michael Fahey, and I offer my condolences to his family and to his religious family, the Society of Jesus,” said Interim Dean John L. McLaughlin. “As an MDiv and then PhD student during his two terms as Dean I experienced firsthand his exemplary leadership. He was tireless in promoting the faculty and students.”

Dr. Anne Anderson, CSJ, former president of the University of St. Michael’s and herself a former dean of the Faculty, concurred.

“Dean Fahey left an indelible legacy at USMC. He was enormously proud of the Faculty of Theology and its scholarship,” she said. “He was also an astute mentor for many students, quietly requiring excellence, while he made connections and opened doors that launched many talented young theologians into to the world of academe. His perceptive analyses of theological perspectives will be missed both locally and internationally.”

Dr. Michael Attridge, who teaches systematics at the Faculty, recalled his first encounter, in 1992, with Fahey. Attridge was in the Elliott Allen Lounge when Fahey approached and introduced himself. The following week, Fahey asked if Attridge would like to do some research work for him.

“He was working on a paper on the post-synodal apostolic exhortation “Christifideles laici” and wanted me to generate a bibliography. Over the next several months, I did so, meeting with him weekly,” Attridge remembered. “He taught me how to search the library catalogue, to think about keywords and also to look for those words in other research languages… He taught me to go to the shelf in the library and look at the books around the volume I was interested in to see what else was there. He showed me the importance of studying the footnotes and bibliography to see what other works might be useful. And finally, he taught me how to use non-traditional indices like the Ephemerides Theologicae Lovanienses. At the end of the four-month project, I produced a bibliography of 200–250 entries. He then asked me to redo it as an annotated bibliography and showed me how to do that. I realized then that I was not doing the bibliography primarily for him, but he was showing me how to do research.”

Fahey then supervised Attridge’s MA thesis on the Eucharist in Anglican Roman Catholic Dialogue and served as a reader on Attridge’s doctoral dissertation.

Fahey, who made major contributions to the study of the theology of the Eastern Church, and to the ecumenical dialogues between the Roman Catholic Church and the Orthodox and Anglican churches, was also known for his kindness, and his care of students was legendary.

“At conferences, doctoral students (not just his own) often found themselves being introduced and their academic abilities extolled to senior scholars, even if we didn’t realize until later the professional stature of some of those people,” McLaughlin recalled. “At the same time, he offered annual workshops back ‘home’ on what initially seemed mundane matters, such as how to organize your first CV or what to do and what not to do at a ‘job dinner’; once again, it was only later that we realized how important these little things would be as we entered into the job market.

“I regularly heard from my fellow students about his attention to their progress through the doctoral program, providing careful and detailed feedback on their work in progress, preparing them for their dissertation defence, and providing glowing recommendations as they applied for various positions. Even after he left us for Marquette University, he continued to be involved with St. Michael’s, serving as an external examiner for doctoral defences, cheerfully offering advice to faculty and students, and always quick to respond to any request for help. He did all this while maintaining his own high academic profile, through his many publications, conference presentations, invited lectures and as editor of Theological Studies.”

As General Editor at Theological Studies, he was known for helping young theologians develop their thoughts and their writing style.

“He took great care with those who submitted articles for consideration and was proud of the fact that even the ones who were rejected, thanked him. He loved to tell the story of one person who wrote: ‘Thank you. That’s the nicest rejection letter I’ve ever received,’” Attridge said.

Fahey led a full and fascinating life. A graduate of Boston College and of the University of Louvain, he held a master’s degree in Romance languages from Fordham University, a licentiate from Weston School of Theology in Cambridge, Mass., and a doctorate in Theology from the University of Tübingen. He was talented cook, an accomplished linguist and a dedicated traveller.

“In the ensuing years when I would meet Ratzinger, whether in Rome, Toronto, or elsewhere, I would remind him of the earlier Tübingen days,” Fahey wrote. “He would inevitably respond something like: ‘Ja, ja, das war lange her!’ which I took to mean: ‘a lot of water has flown over the dam since then!’”

At one point, famed Canadian Jesuit theologian Bernard Lonergan lived in the same residence and Fahey would speak about Lonergan pacing the halls of the residence, muttering to himself, “It’s all there. I know it’s all there,” Attridge said.

He was awarded an honorary Doctorate of Divinity from St. Michael’s College in 2005.

In 2006, Dr. Attridge and Dr. Jerry Skira of Regis College published a festschrift in honour of Prof. Fahey entitled In God’s Hands: Essays on the Church & Ecumenism in Honour of Michael A. Fahey, S.J.

“Prof. Fahey’s legacy continues to carry great weight at St. Michael’s, both for the measure of his scholarship and for his care for his students. We offer the Jesuits our deepest condolences,” St. Michael’s President David Sylvester said

The Faculty of Theology liturgy of Wednesday, March 24 at 1:30 p.m., will be offered for Fr. Fahey. A Zoom link will be available via inquiry@usmctheology.utoronto.ca.

“With the passing of Michael Fahey, the Church and the Academy have lost a leading scholar, and St. Michael’s has lost a good friend,” McLaughlin said. “May he rest in peace and may his memory be a blessing.”