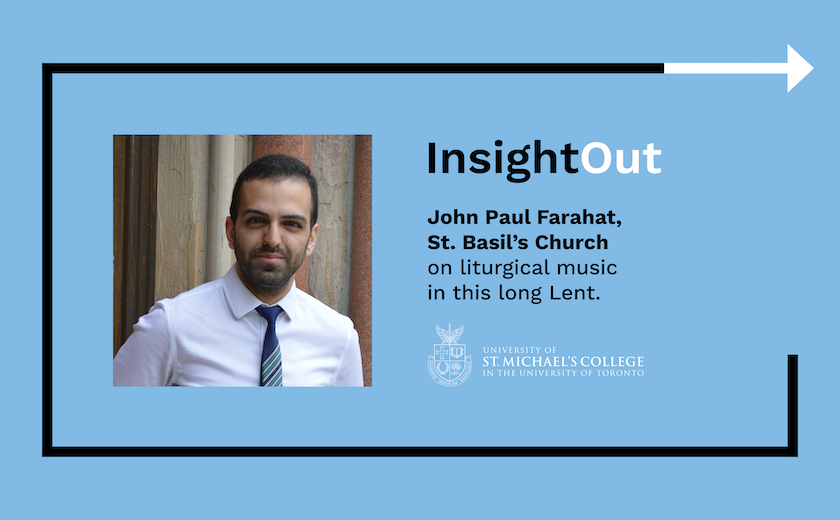 Insight Out: Liturgical Music in this Long Lent

John Paul Farahat is Director of Music and Principal Organist of St. Basil’s Church. He conducts St. Basil’s Schola Cantorum and Parish Choir. He received the Doctor of Musical Arts degree in Organ in 2019 from the University of Toronto, where his research focused on the life and improvisations of Victor Togni (193 –1965), internationally-renowned organist of St. Basil’s and St. Michael’s during the 1960s.

Liturgical Music in this Long Lent

Liturgical music in Lent can sometimes feel like a trimmed-down version of what we would experience in Ordinary Time. In Lent, the Gloria and Alleluia are omitted. The organ is only used to support singing, and there are no preludes or postludes (with the exception of Laetare Sunday, and the solemnities of the Annunciation and St. Joseph).

In normal times, these changes are felt with a particular intensity over a 40-day period. But much of the liturgical music of the last 12 months could be said to reflect that pared-down character of the Lenten season.

The most noticeable change in liturgical music since March 2020 is the suspension of congregational singing.

The 1967 document Musicam Sacram: Instruction on Music in the Liturgy was a product of the Second Vatican Council. It spoke beautifully about the importance of congregational singing, a directive wholeheartedly embraced by the St. Basil’s community. But in a context in which congregational singing is suspended, how do we understand the role of music in worship? While Musicam Sacram justly emphasized the role of outward congregational song, it expanded on this by underscoring that congregations “should also be taught to unite themselves interiorly to what the ministers or choir sing, so that by listening to them they may raise their minds to God” (Art. 15).

St. Basil’s has adopted and applied this directive with care by reintroducing the regular use of entrance and communion antiphons in the liturgy. In listening to and praying with the antiphons, the congregation enters more fully into the celebration of Mass. Like the readings, psalm, and gospel acclamation of the Liturgy of the Word, the antiphons change daily, set as part of the lectionary cycle. The antiphons are scriptural, appointed for each Mass, and are intimately linked to the texts of the liturgy. Take, for example, the Entrance Antiphon of the Second Sunday of Lent, connected to the Gospel reading of the Transfiguration: “Of you, my heart has spoken: Seek his face. It is your face, O Lord, that I seek; hide not your face from me” (Ps. 27). Or, alternatively, the Antiphon at the beginning of the Palm Sunday liturgy: “Hosanna to the son of David: blessed is he who comes in the name of the Lord, the King of Israel. Hosanna in the highest!” (Mt. 21).

The music ministers of St. Basil’s have also adapted their roles to the realities of the pandemic. St. Basil’s Schola Cantorum, an octet comprised of students who would sing both on weekends and select weekday feasts and solemnities, has restructured into small and safely distanced quartets. In addition, they have supplemented the roster of cantors who sing for Mass (in person and live-streamed). St. Basil’s Parish Choir, usually a hallmark of worship on Sundays at the 10:30 Mass, has been rehearsing weekly online since last March, and occasionally recording virtual choir videos. The next video will be released during Eastertide. The St. Basil’s Singers, too, have met regularly online.

I am confident that the community will reclaim its collective voice at the end of the pandemic. Once we exit this long Lent of many months, we will once again be able to come together as a community in worship in a way that resembles normalcy. In the words of St. Paul, we will “sing songs, hymns, and spiritual songs” (Col. 3:16).

And, surely, we will sing an Alleluia or two as well.