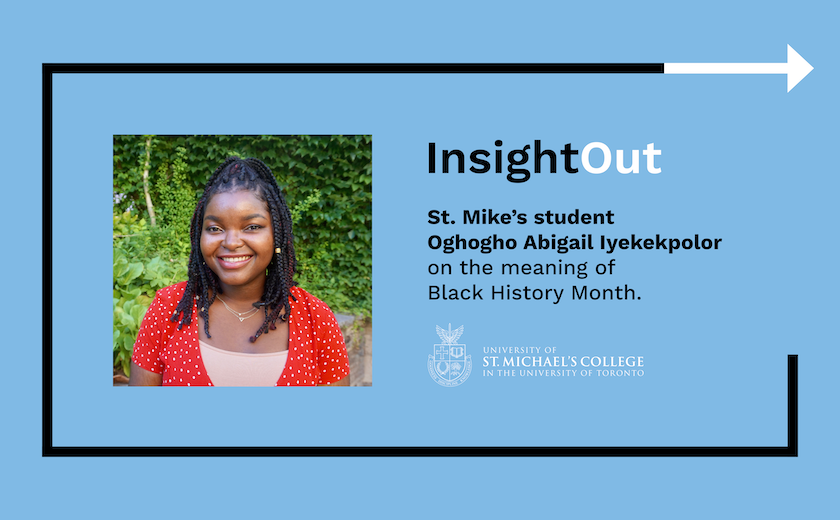 Oghogho Abigail Iyekekpolor is in her 3rd year double majoring in Neuroscience and Psychology and minoring in Practical French. In her time at St Mike’s, she has served as an Orientation Leader and the Student Life Programming Assistant. Last year, she launched the #SOULSofSMC social media campaign. She is currently serving as a residence don.

When I first started writing this InsightOut, I honestly felt a bit apprehensive. While I’m grateful for the opportunity to share my thoughts, I can’t deny the nervousness that comes with it. Talking about Black History Month is like opening Pandora’s box: it calls to mind slavery, the Civil Rights Movement, #BlackLivesMatter Movement, police brutality, systemic racism, generational trauma. It’s a dense topic and almost impossible to talk about everything without getting sidetracked by feelings of anger and exasperation. It’s quite daunting, and although part of me doesn’t want to exclude anything, what I want to talk about most is what Black History Month represents to me, especially based on the things I’ve learned in the past 12 months.

Originally, Black History Month was “Negro History Week,” introduced by African American scholar Dr. Carter G. Woodson in February 1929. The aim was to raise awareness of the experiences of Black people in America and around the world while celebrating their great achievements. Woodson set the week in February to incorporate the birthdays of Abraham Lincoln and Frederick Douglass, two Americans who played an instrumental role in shaping Black history in the United States. The celebration gained strong momentum in the years to follow and by the 1970s Negro History Week became Black History Month. In Canada, the House of Commons officially recognized February as Black History Month in December 1995, following a motion by Dr. Jean Augustine, the first Black Canadian woman elected to Parliament.

Since then, Black History Month for many of us growing up in North America has been about celebrating figures of the past. We learn about the wise words of Martin Luther King Jr. in his “I Have a Dream” speech, the brave actions of Rosa Parks, the fortitude of Malcolm X, groups like the Black Panthers and so on. These are a few among many strong people who fought the great battle against racism, and “we as a people are soooo much better for it now!” As a young Black girl who’d had her skin called poop and her foreign name mocked countless times I was more than willing to accept this narrative. A whole month to celebrate people who looked like me—what could be better? I practically worshipped people like Harriet Tubman and Maya Angelou when I was in elementary school.

And then I saw a story about Trayvon Martin on the news when I was 12 years old. I always feel a pang in my chest when I think about this because it was the first time I truly felt afraid to be Black. Then came Eric Garner. Tamir Rice. Sandra Bland. Andrew Loku. Alton Sterling. Philando Castile. Elijah McClain. Ahmaud Arbery. D’Andre Campbell. Breonna Taylor. George Floyd. Regis Korchinski-Paquet.

Evidently, that great battle against racism is not over.

This isn’t an attempt to discount the invaluable contributions of the larger-than-life individuals we usually celebrate during Black History Month, those who have galvanized movements and brought about invaluable change. But it is a call-out and a reflection. Black History Month isn’t only about the greats of history or people of the past. It’s also about ordinary people who have been and continue to be brutalized without any regard for their human dignity, just because of the colour of their skin. It’s about how #BlackLivesMatter is treated as a political statement rather than a simple affirmation. And, very importantly, it’s about knowledge and empowerment.

I’m currently taking the course SMC300, a special topic under Book and Media Studies taught by Emilie Nicolas on #BlackLivesMatter in the Media. Previously, we discussed the experience of learning about Black history in Canada and how sub-par our education on the subject has been. An overarching theme for some of our discussions has been the idea of erasure. Black people in Canada are often regarded as new, even though the first Black person in this country, Mathieu de Coste, arrived in 1608, not to mention the enslavement of black people in Canada during the 17th and 18th centuries. We almost never learn about this, only hearing stories of the underground railroad that led enslaved people from America to “freedom” in Canada.

Apart from historical events like these, Black people have been cheated of the acknowledgement they deserve in many other areas of pop culture and society: fashion, music,  dance, language, science—the brilliant Black individuals who contribute to these areas are often overlooked while their accomplishments are lauded when embraced by white people.

What I’m trying to say is that I believe we celebrate Black History Month today for the same reasons Dr. Woodson established Negro History Week more than 90 years ago. Members of the Black community are still not being recognized for their achievements and are still being treated inequitably. We may not be facing the exact same racism that Woodson endured in his time but we must combat our own reimagined version of it to move forward; the fight is ongoing. It’s a daunting idea, but the past year has shown all of us what it feels like to live through major historical events and has shown us our ability to partake in that history and to choose what side of it we want to be on.

The past year has also shown us that these efforts can happen outside of February. Just look at last summer: with a pandemic raging throughout the world, people were forced to sit and reckon with the obvious displays of systemic anti-blackness around them. Discussions about it were unavoidable.

Consequently, if you ask me, Black History Month serves as a reminder that even in a society where the cultural and social impacts of Black people are felt all around us, our lives and contributions are still so disregarded that we must relegate them to one month. Black History is everywhere: it’s the new dance trend that you see on TikTok, it’s the traffic lights that guide you smoothly home during your daily commute. The reality is that Black history IS history, period. Until the time when we can fully recognize that and embrace the complex and beautiful humanity of Black people every day of the year, we will continue to use the month of February to mourn our losses, celebrate our heroes, and mobilize for greater change.