Michael O’Connor is Associate Professor, Teaching Stream, in the Christianity and Culture program and Book and Media Studies. His research interests include music and liturgy and he is director of the St. Michael’s Schola Cantorum and the college Singing Club. 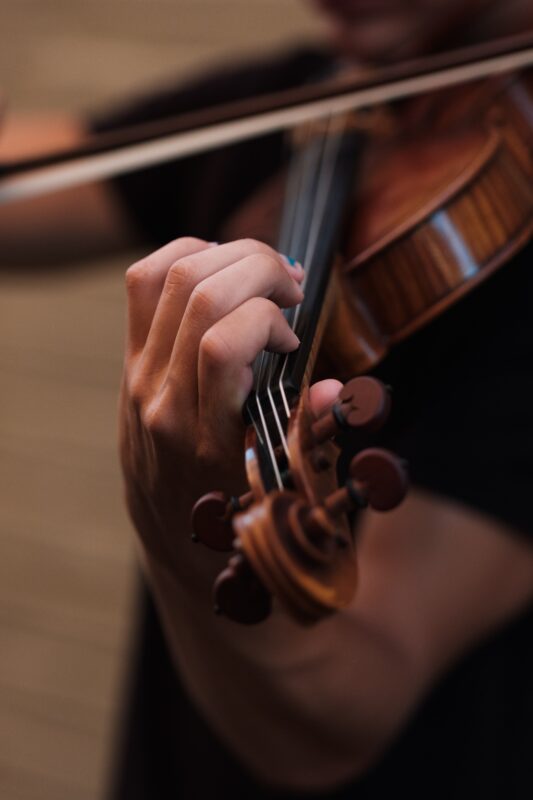 You were lucky the get tickets for the Tafelmusik late-night concert. You arrive an hour early for check-in, as required, and stand in a well-spaced line in the cordoned-off section of now pedestrianized Bloor Street. Your mask is inspected, your temperature taken, you are asked some routine questions about your health (all rather reminiscent of flying to the US in the old days—when we could do that), and are then directed to your seat, four seats away from the next person, empty rows in front and behind. The tang of bleach competes with wood polish. At least there’s space to put your coat, scarf, and mitts (it has been an especially cold March). You nod at your nearest neighbours, an indistinct gesture that could mean “Why on earth are we here?”

The tiny orchestra is spread out over the whole dais. The string players are all wearing masks, the harpsichordist is wearing gloves, and the oboist is inside a plexiglass booth, standing on a disposable absorbent mat. The choir, of course, has been furloughed—they are supervectors. According to the program notes, which you read on your phone, you’ll be hearing music from seventeenth-century Venice composed in thanksgiving for deliverance from the plague. The oboe gives a note and the strings begin tuning up; at this sound, neither music nor noise, you shiver with unpremeditated delight. It has been almost a year since you heard any live music—other than the neighbour’s daughter practising clarinet. You realize in that instant how heartsick you have become with the diet of autotuned, click-tracked, virtual ensembles.

You can’t take you eyes off the three-dimensional, flesh and blood performers. They make occasional eye contact with each other at beginnings and endings but for the most part, like geese in formation, they sense together the music’s flight, bobbing and weaving as one. Carried along with them, your spirit soars, your pulse quickens. Behind your mask, you chuckle with nervous joy. They play for an hour (no interval, no washrooms, merchandise for sale online only) but it passes in moments. Your final applause is exuberant, reverberant, as you try to fill the space with the appreciation of an absent crowd.

At St. Basil’s, you join the ticket-holders for the 11:07 mass (“enter through the west door, please stand on the red dots”), where your mask is inspected and your temperature taken. Once the 10:30 mass is over, you file up the stairs into church. Household groups sit together; others sit in isolation. You choose a spot in the sightlines of the camera live-streaming the mass on the parish’s YouTube channel. Your mother will be watching (“No, not lingering adolescent guilt,” you insist: “it will lift her spirits to know she has a proxy at mass”). You greet parishioners whose names you now know from Zoomed faith-sharing sessions. Stilted remarks are exchanged across the voids but, like teenagers, you have learnt to save your most vulnerable conversations for social media. Gloved sacristans lay out all the necessaries next to the altar; there will be no servers.

The entrance hymn is sung by an unseen cantor and although the words are projected onto two large screens, you are encouraged only to hum along quietly (“Singing is worse than coughing”). This suits you, since you are a reluctant singer—unless it’s “Come all Ye Faithful,” “Amazing Grace,” or that bit from the Mass of Creation that everyone knows. You recall the choir director who insisted that singing is all health benefits and no side effects—you wonder how he’s enjoying his humming. Readers proclaim the scriptures from individual iPads. The priest’s homily is polished—which is not surprising given the number of times he has preached it today. Occasionally he turns to the camera to address the over-60s watching from home. He looks tired. You enjoy the reminder that the collection basket has been stood down (“temporarily, of course”), and nag yourself (again!) to go online as soon as you get home to make your donation.

Bread and wine are prepared at the altar. The organ plays softly, a half-disguised melody accompanied by the clink of the cruets on the chalice. The sight of the empty seats conjures up the parishioners who normally occupy them, and your mind’s eye is flooded with images of warm, colourful, singing bodies. In among them, you wonder if you really do see faces of angels, apostles, martyrs—a shimmer of countless holy ones. 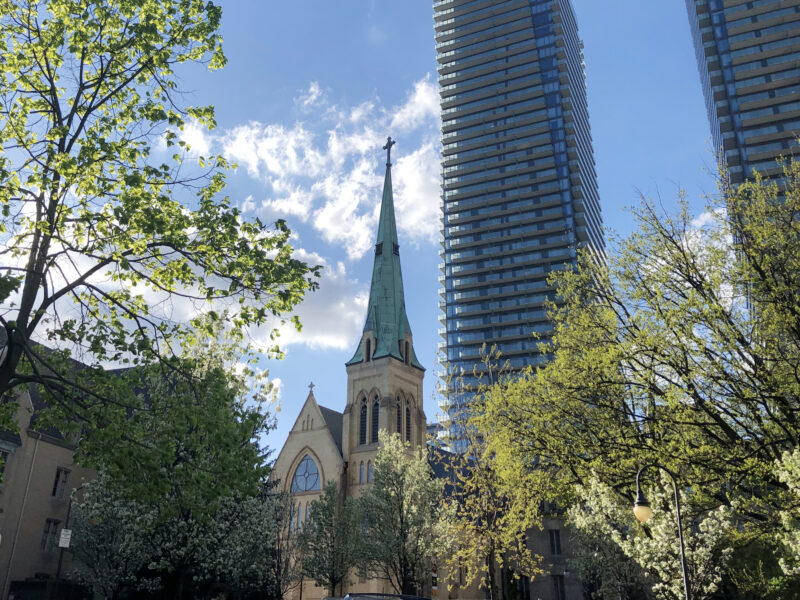 Communion is a regimented, high-alert manoeuvre. You make your way forward biddably. Against all reason, you lower your mask. As the social distance collapses to near-zero, the minister deftly drops the host onto your well-scrubbed hands. You exhale your Amen. Back in your seat, you savour communion. You think of those you love, those in need, those who have not made it this far. While the invisible cantor reminds you to taste and see how good the Lord is, your prayers rise on clouds of Purell and latex powder.

After the closing devotionals (St. Michael has been joined by St. Blaise and St. Roch), you leave the church in an orderly fashion (“exit through the east door”). The organ postlude is almost loud enough to drown out the sound of disinfectant being sprayed on the pews as the church is made ready for the 11:44 mass, the last one before the lunch break.

On the long walk home, your mind is a-chatter: yes, togetherness is in your genes, primates love to sing and laugh together, to feast and embrace. But as a rational primate, you have been hearing for months now that your neighbour is a potential biohazard—that you could be a biohazard—and that the only safe space is the digital universe, where viruses are metaphors.

When you get home and inside, you slump against the door, pull off your mask and take several long breaths. You’re exhausted. You’re blessed. You just might be hungry (you’re never sure these days).

The lockdown was not easy; but the opening-up feels much harder.

Guidelines for rehearsals and concerts during the pandemic have been issued by the German Orchestra Association’s Health and Prophylaxis Working Group and by seven orchestras in Berlin. Two bodies in the US have produced guidelines for the celebration of sacraments: the Thomistic Institute in Washington and the Federation of Diocesan Liturgical Commissions. An alliance of singing groups sponsored a webinar on the near future of singing.