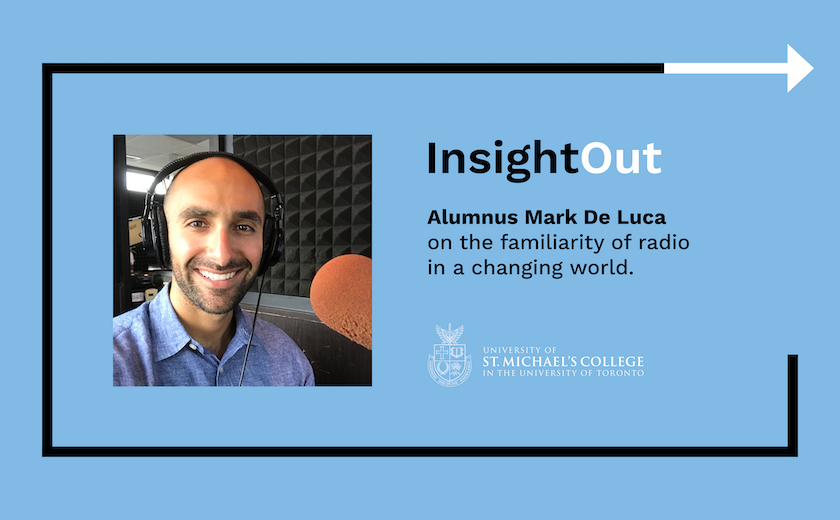 InsightOut: The Familiarity of Radio in a Changing World

Mark De Luca (SMC1T5) holds a Bachelor of Arts (Political Science and History) degree from the University of Toronto. After graduating, he pursued a Post-Graduate Certificate in Broadcasting—Radio from Humber College, ultimately moving out West to work as a news reporter/director in rural Manitoba. For the past five years Mark has had the privilege of working in rural and urban centres at a number of radio stations, including 730 CKDM (Dauphin, MB), The Shoreline’s myFM (Kincardine, ON) and 680News in Toronto. Mark now works as a Traffic Reporter with the Canadian Traffic Network (CTN) and can be heard every afternoon on the following stations: Boom 97.3, Flow 93.5, Jazz FM 91, The New Classical FM, 1460 CJOY and Magic 106.1.

InsightOut: The Familiarity of Radio in a Changing World

It’s been roughly one year since Toronto experienced its first full lockdown. I remember it vividly. I was at the local pub having a beer with some buds, chatting about this potential pandemic spreading across the globe. It was being called COVID-19, similar to the SARS outbreak 16 years prior, but we didn’t know much. The World Health Organization was apprehensive about classifying it as a pandemic but was keeping an eye on it. Nearly 365 days later, we find ourselves in the situation we are currently dealing with.

It goes without saying that COVID-19 has completely changed lives for all. From the way we interact with one another to how we conduct our daily lives, this once-in-a-generation virus has been front and centre for one whole year.

At times it seemed you couldn’t get away from it. Every popular media platform provided wall-to-wall coverage about the pandemic at all hours. Having worked in news radio for close to five years I was used to information overload but COVID-19 presented a whole new meaning when it came to the 24/7 news cycle. Radio—an industry already going through immense change—once again needed to find a way to adapt, learn, and grow.

Rather than disregard the virus entirely, I looked for ways we could evidently beat the illness while living and working amid it. For some, that meant working from home, wearing a mask, social distancing, weekly Zoom video calls, but for me that meant using my platform: radio, and the power it still has over a population.

Radio has been around for more than 100 years and has changed along with the world around it. Although the medium has taken a new direction in the form of engagement through social media platforms, at its core, the main objective is to communicate important information to a wide audience in real time. As a traffic reporter I quickly realized this when the busy city streets of Toronto and its area highways instantly became bare. What was once gridlock on the 401 now seemed to be open, the hustle and bustle of Yonge & Dundas non-existent, and a backed-up Gardiner Expressway a thing of the past.

I pondered this new world and many times asked myself, “What’s the point of these reports if everyone is at home?” but, in reality, that was not the case. Although the streets were substantially less busy, a new group of people came to light… the Essential Workers. The ones whose jobs did not allow them to stay at home were the people now occupying our roadways. The nurses, frontline health care workers, EMS paramedics, warehouse attendants, truck/ delivery/ bus/ taxi/ UBER drivers, construction workers, plumbers, electricians, mechanics, police officers, and firefighters were now the primary commuters. They were the ones waking up early in the morning, getting in their cars—or jumping on public transit—to provide the necessary services to keep our province safe and economy afloat.

The realization that, for a select few, working from home was not an option quickly resonated with me. For these people, a new level of fear, stress, and anxiety was unexpectedly thrust upon them. For many of these workers, the only break they could potentially have (if they received any at all) was that short timeframe between home and work that they had to themselves.

I reflected on this new reality and how my job could make the lives of these essential workers easier. What could I do to help them? Like many other industries, I was now relegated to a “Home Office” which was anything but—realistically it consisted of a desk, microphone, and a bed sheet over my head. But I was home, and for many this was not an option.

It was at that moment I made the decision to dedicate all my reports to essential workers across the Greater Toronto Area. If I could make someone’s commute easier, I see that as a win. Radio has the unique power to provide much-needed companionship to so many, adding an extra voice to someone’s day when at times they may feel alone.

My time at St. Michael’s taught me about the importance of community, and I have taken those lessons with me throughout my life—I do not take that for granted. For these workers, community is more important now than ever before and I have applied those beliefs to my traffic reports. As we continue to adapt to the changes of COVID-19 I am optimistic there is a light at the end of the tunnel. With enough self-discipline, focus, and commitment to work in our own unique ways we will beat this thing.

I hope radio, in all its changes, brings you that sense of comfort and familiarity we are all longing for. As I say after I end every week on-air, “Until next time, be safe out there and I’ll see you next week.”