InsightOut: There Will Be Cake

Home / News & Updates / InsightOut: There Will Be Cake

Rooms Available in SMC Residence for...

InsightOut: There Will Be Cake

Mike Czobit is the director of the Office of the Principal, and the coordinator of SMC One. Before joining St. Michael’s in 2017, he was an editor and writer at World Vision Canada.

There Will Be Cake 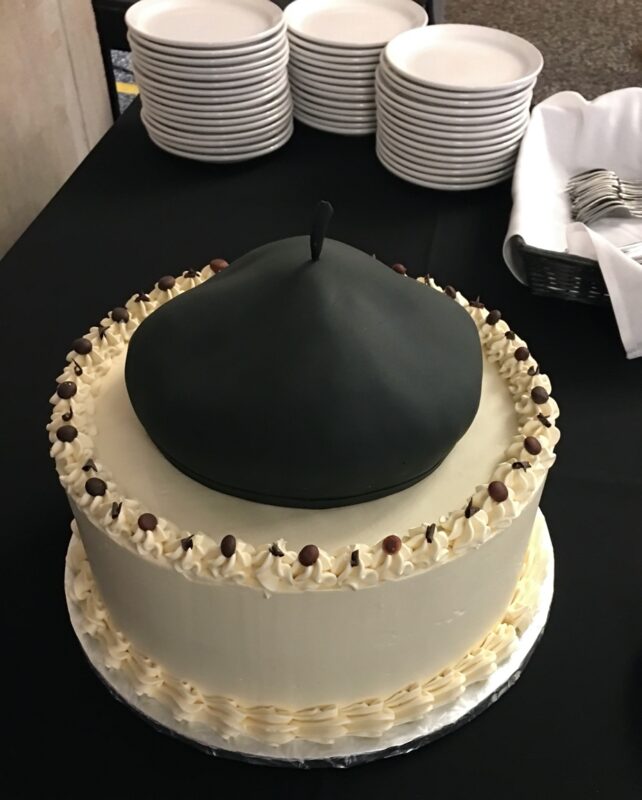 Every year, before the Gilson Seminar in Faith and Ideas meets for its first lecture in September, we have an opening reception and something we call the “Beret’ing In.” To the tune of Prince’s “Raspberry Beret,” each incoming Gilson Seminar student approaches the lectern in Charbonnel Lounge and receives a black beret, officially joining the seminar. After every student has been beret’ed in, cake is served—a special kind of cake: raspberry beret cake.

This tradition is a night of fun and introductions before the hard work of the Gilson Seminar begins. The course, which is split into two half-term classes over the course of the year, is one of three first-year seminars offered by St. Michael’s College as part of our SMC One program. The other two seminars are the McLuhan Seminar in Creativity and Technology and the Boyle Seminar in Scripts and Stories.

These seminars are among the most popular first-year courses at the University of Toronto, owing to a number of factors. For example, each is taught by a member of our talented St. Michael’s faculty in a small class setting that fosters fascinating discussions and close friendships with fellow classmates, and each features an international learning experience. In the Boyle Seminar, students are invited to travel to Dublin after the April exam period. A trip to Silicon Valley takes place during reading week for the McLuhan Seminar. And the Gilson Seminar’s second half-course has its destination in its title: The Gilson Seminar in Faith and Rome.

For most people, international travel these days has been ruled out for health and safety reasons, and for the impracticality of visiting a country when it likely requires a quarantine upon arrival. But, back in February, before the present conditions of international travel took hold, there still was the possibility to go to Rome or Dublin. In fact, that was the plan for both the Gilson and Boyle classes (the McLuhan Seminar had traveled to Silicon Valley last November, before anyone here had really heard of the virus).

In the Principal’s Office, we are responsible for organizing all three SMC One trips. Throughout January and February, we proceeded as usual, preparing students by holding Safety Abroad workshops, requesting traveler information, and making airfare arrangements. We worked with our partners in Dublin and Rome to finalize details for each trip, and in the case of Rome, arranged for tickets for the Pope’s Wednesday Audience. Everything was proceeding as it had every year, except, as everyone knows now, this wouldn’t be a normal year.

By late February, my office was paying particular attention to reports of COVID-19 cases emerging worldwide. When the first few cases surfaced in northern Italy, we were concerned but hopeful that the country would get control of the virus. Reflecting on that now makes me realize how little we all knew and how naïve my optimism was. Day by day, in early March, the number of infected patients rose. Not just in Europe, but also at home. These developments worried our SMC One students, who began asking my office questions about the safety of our planned trips. At the time, we honestly didn’t know what the virus would mean, but we assured our students that safety would be paramount and that the trips could be postponed. Then, on March 12 that happened. The University decided that due to safety concerns, all student travel would be postponed until further notice. This was the right decision.

After we unwound the arrangements for the planned trips, my office had a different task to attend to, which was to start recruiting for next year’s SMC One seminars. When we promote these classes, we do the opposite of shying away from discussing their travel components. But during this recruitment period, getting on a plane to go somewhere far away seemed like the least desirable thing to do. At the same time, the 2020–21 SMC One seminars were months away and the situation in March would change—and, to be optimistic, be much, much better.

We pushed forward with our recruitment effort, inviting incoming U of T students to apply for a spot in our seminars. We expected that we would struggle to fill the classes. We expected that SMC One would have lost its popularity. What happened was something different.

When the application window closed on June 15, we had received the highest number of applications for SMC One in the three years their present format has existed. In fact, we doubled the total number of applications over our previous best. Our incoming students were not deterred by news reports of the virus or of how international travel will never be the same. They reacted to the closing of borders with a greater desire to see them open again. What they want, and what classes such as SMC One will provide, is a return to better times when a desire to explore and experience life and culture in different parts of the world can enrich a university education.

As the new academic year begins, we have begun planning for our SMC One classes. Different this year is that all three will take place in the Winter term, with the hope that all will be able to be in-person or have a larger in-person component than is safe in the Fall term. It is too early to know what international travel will look like in 2021, but we’re hopeful that conditions will improve.

Every year, the Gilson Seminar begins with berets and cakes. We hope to see this tradition resume in this coming year’s Gilson class. And when the cake is finally served, it will have the double meaning: welcoming a new class to St. Michael’s College and also celebrating how far we’ve come through difficult times. When we began our recruitment effort for SMC One in the spring, we were pessimistic about our prospects of filling these classes. Our students showed we should have felt otherwise.