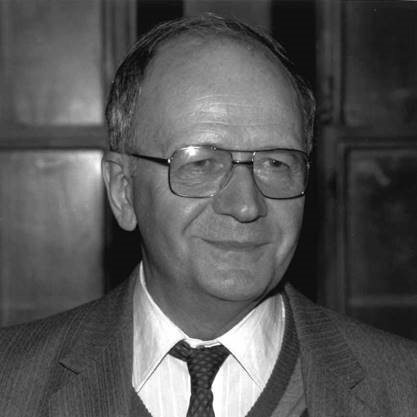 The Pontifical Institute of Mediaeval Studies (PIMS) is mourning the death of long-time faculty member Fr. Édouard Jeauneau, who died at the age of 95 on Monday, Dec. 9, 2019 in Chartres, France.

Fr. Jeauneau was a Professor of Medieval Philosophy at PIMS and the Centre for Mediaeval Studies (CMS) at the University of Toronto from the 1975 through to 1995. He was named Institute Professor at PIMS in 1990 and was awarded an honorary doctorate in 2002.

His involvement in the medieval community in Toronto began following a formal invitation in 1974 to join the PIMS Faculty from Rev. E.A. Synan, Praeses, and Rev. James McConica, CSB, Chairman of the Search Committee.

Until 2015, he spent about eight months each year working on his many projects here in Toronto, most notably the five-volume Periphyseon of Johannes Scottus Eriugena (Turnhout: Brepols).

Fr. Jeauneau was consistently awarded substantial Social Sciences and Humanities Research (SSHRC) grants, and hired a long string of Centre students to work for him, paying them generously. He also trained many of these students in reading the particular handwriting in the manuscripts and in editing the texts.

Among the honours bestowed on him over the years was the position of Directeur de Recherche Honoraire au CNRS in Paris, France’s National Centre for Scientific Research, and an appointment as a fellow of the British Academy.

A funeral Mass will be held Monday, December 16 in his small home town of Coudray-en Perche, about 60 km from Chartres.
His presence will be missed by all who knew him.