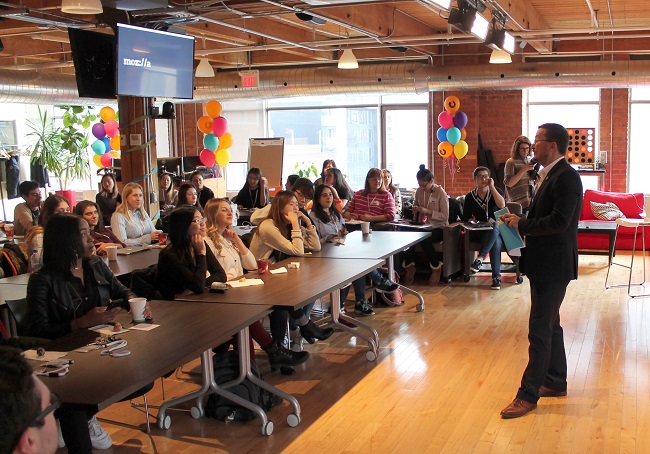 On Wednesday, Nov. 22, University of St. Michael’s College Assistant Professor Paolo Granata’s “Social Technology and Networks” class began shortly after 2:00 p.m. Though they met at the normal time, students found themselves in a unique environment: the fifth-floor open-concept offices of Mozilla, where employees hosted a workshop for the class on digital citizenship, internet health, and open-access culture. Balloons had not yet come down for the launch celebration of Firefox Quantum, recently dubbed “the browser built for 2017” by Wired magazine.

Mozilla is a non-profit organization dedicated to the ideals of open-source software, which allows users to customize and alter digital products according to their own purposes. During the workshop for Granata’s class, presenters emphasized a broadly humanistic approach to questions about digital life—one that St. Mike’s media theorist Marshall McLuhan may have found amenable. “What do you want to be when you grow up?” presenter Mike Hoye asked students, continuing, “Maybe we can do better than that.” He suggested replacing this common question about “how you want to sell your labour” with a larger and richer one: “How do you want the world to be different when you’re done?”

Sam Burton, Director of Insights at Mozilla, briefed the class on the “Internet Health Report,” an open-source research document the Mozilla Foundation publishes each year that is dedicated to understanding the ways people and societies are using the internet. Breaking out into small groups, students then had an opportunity to assess issues raised by the findings of the 2017 report, such as the dominance of Google and Facebook in the digital ad market, the responsibilities of news consumers versus news sources in matters of fact-checking, and the underrepresentation of languages such as Chinese and Arabic relative to the number of internet users for whom either is a first language. What might “health” look like in these complicated scenarios?

“We’re so used to thinking of online as this thing we access, and not necessarily an actual space itself,” said fourth-year student Christina. The Book & Media Studies and English double-major found the workshop to have helped her “[gain] perspective on the social networks we use, and not just [in an] abstract way.” Others, such as fourth-year Book & Media Studies student Debbie, appreciated “being outside of the classroom in an actual space where people work in that industry.”

Mozilla uses the model of an ecosystem for understanding the internet and digital space: at any time, there are varieties of “healthy” and “unhealthy” elements, but it is possible to develop the internet in a way that generally encourages health. Mozilla Foundation Executive Director Mark Surman intends to make this idea of “internet health” a major social issue. “What kind of digital planet do we want?” he asked during his remarks. Mozilla’s vision for the future of the internet is of a “beautiful forest” that is accessible to the largest possible number of people, the director said, but another option remains “a clear cut” where a handful of major organizations gather and consolidate resources for their own purposes. Surman told students that we must “look after the digital world… If we want it to go well.”