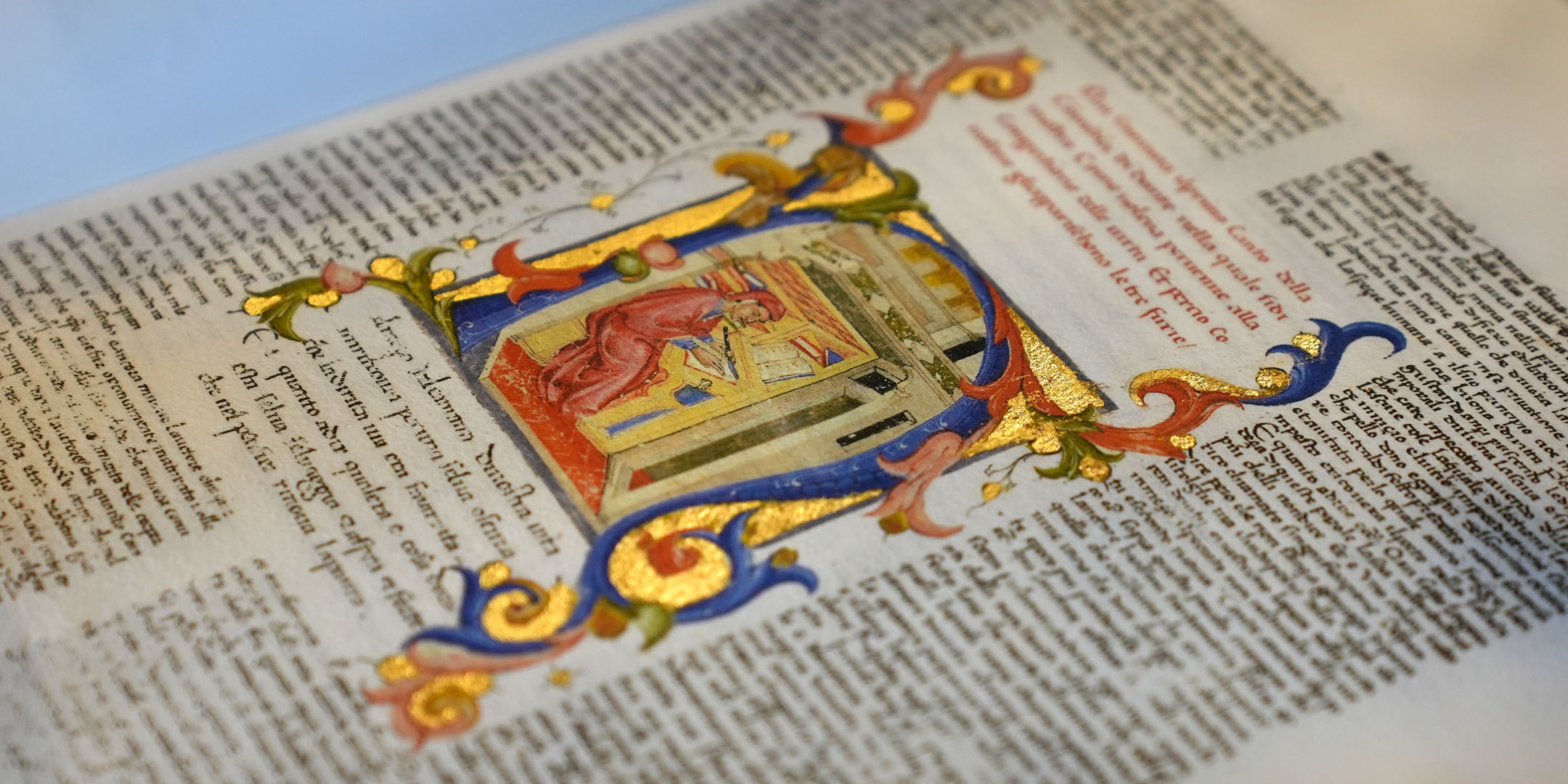 A Journey through the Centuries: The Making of Dante Guarneriano

On October 20, join St. Mike’s Book and Media Studies prof. Paolo Granata and a panel of experts in Medieval studies and manuscript culture to explore one of the oldest and most richly decorated medieval copies of Dante’s Divine Comedy ”Inferno.”

A Journey through the Centuries: The Making of Dante Guarneriano

Amanuenses from the Scriptorium Foroiuliense in San Daniele (Italy) will hold a series of workshops to teach the secrets of the century-old tradition of Medieval calligraphy.

A virtual tour of the Opificium Librorum and Biblioteca Guarneriana, live from San Daniele del Friuli, will showcase “in real-time” the making of a Medieval manuscript.

On October 20-21-22, 2021, for the International Week of Italian Language and Culture, the Department of Italian Studies at the University of Toronto, in collaboration with St. Michael’s College, Massey College, and the Istituto Italiano di Cultura in Toronto, presents a series of events to celebrate the father of the Italian language, the Mediaeval poet and philosopher Dante Alighieri, and his groundbreaking trilogy, the Divine Comedy, in the year that marks the 700th anniversary of the death of the “sommo poeta”.

A magnificent handmade illuminated anastatic copy of the “Inferno”, known as Dante Guarneriano, will travel to Toronto from the Biblioteca Guarneriana in San Daniele del Friuli, one of Italy’s oldest and most venerated public libraries, founded in 1466 by humanist Guarniero d’Artegna and enriched with the collection of Archbishop and bibliographer Giusto Fontanini in the 18th century. The Dante Guarneriano is one of the oldest and most richly decorated Medieval examples of Dante’s Divine Comedy “Inferno”, dated late 14th to early 15th century. Miniatures and historiated initials are attributed to Bartolomeo di Fruosino, one of the most influential illuminators of the Florentine School. A notable miniature in the Dante Guarneriano depicts Dante in his studiolo (within the historiated initial “N” which marks the famous incipit of Dante’s journey through Hell: “Nel mezzo del cammin di nostra vita…”).

The copy of the Dante Guarneriano that will be displayed in Toronto has been handcrafted by the Scriptorium Foroiuliense in San Daniele, one of the most esteemed centers of Medieval calligraphy and book production in Italy. Specialized in Medieval historical scripts and manuscript production, the Scriptorium Foroiuliense—Scuola Italiana Amanuensi—has produced a dozen anastatic copies of the Dante Guarneriano, on handmade paper 100% cotton fibers, following the traditional techniques used to create the lavishly illuminated manuscripts, including miniatures gilded with gold leaf, finely decorated illustrations, and Medieval luxury bookbinding techniques. The handcrafted illuminated anastatic copy of the Dante Guarneriano will arrive in Toronto with a delegation of the City of San Daniele, namely Mayor Pietro Valent and the amanuenses of the Scriptorium Foroiuliense.

On October 20, the Italian delegation will join a panel of experts in Medieval studies and manuscript culture—York University’s Professor Samia Tawwab—coordinated by University of Toronto’s Professor and Senior Fellow at Massey College Paolo Granata, to officially present the copy of the Dante Guarneriano, exploring the making of this unique bibliographic artifact. The event will be live streamed on YouTube at 4:30 pm EST from Massey College for the Massey Dialogues series.

Following the presentation event at Massey College, on October 21 and 22, at St. Michael’s College and Massey College, amanuenses of the Scriptorium Foroiuliense, specialized in Medieval historical scripts such as Gothic Textura, Uncial, Beneventan, Carolingian, will hold a series of free workshops open to University of Toronto students as well as to the general public (registration required; COVID-19 protocols will be observed).

The series of events to celebrate the Dante Guarneriano will conclude on October 22 with a virtual tour of the Opificium Librorum and Biblioteca Guarneriana, live from San Daniele del Friuli, to showcase “in real-time” the making of a Medieval manuscript and its century-old tradition. The event will be live streamed on YouTube and Facebook at 4:30 pm EST.