Meagher Lecture to Look at Emotional...

After fire destroyed much of Notre Dame Cathedral earlier this year, Paris and the world were relieved to discover that the landmark’s 19th-century Cavaillé-Coll organ, one of the most powerful and moving organs in the world, had survived the blaze. 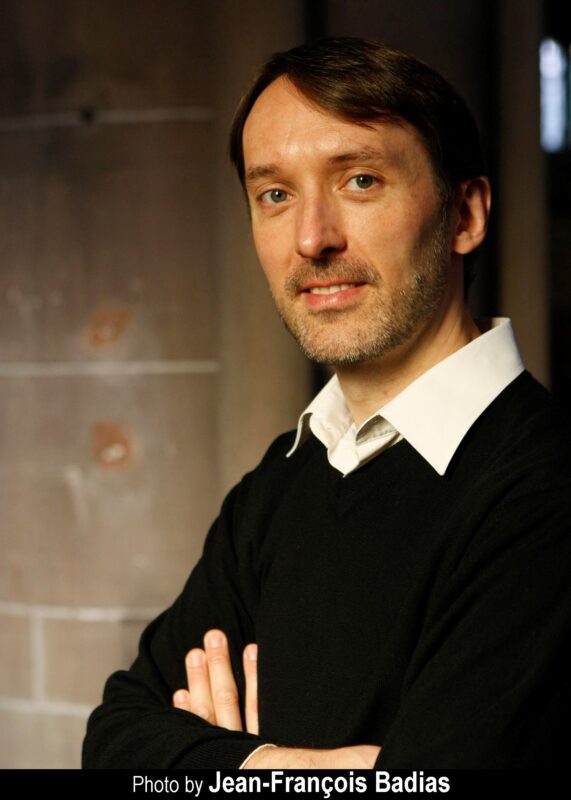 Olivier Latry is Titular Organist at Notre Dame Cathedral in Paris. On Nov. 22, he will perform a special concert at St. Basil’s Church in honour of the 100th anniversary of the installation of the St. Basil’s organ.

Now, seven months after the April 15 fire, one of the few people in the world to regularly play the Notre Dame organ will be on campus to perform a very special concert.

Olivier Latry, Titular Organist at Notre Dame since 1985, will visit St. Basil’s Church at the University of St. Michael’s College to play in honour of the 100th anniversary of the installation of St. Basil’s organ. The Royal Canadian College of Organists will co-sponsor the event.

“I’m very honoured to be chosen to come for the 100-year anniversary,” Latry says, noting that Notre Dame’s organ will inevitably influence his performance in St. Basil’s.

“I’ve spent two-thirds of my life at Notre Dame,” say Latry, whose January album recorded in the iconic church was the last recording made on the Notre Dame organ before the fire. “I’m always thinking about the organ, and when I’m somewhere else, I try to reconstruct the sound that I have in Notre Dame on the organ that I will play.”

The Casavant Frères organ Latry will play at the Fri., Nov. 22 concert in St. Basil’s may serve that purpose well. First installed in 1919, the instrument is one of the few organs in Toronto to be built according to the ideals of the French Symphonic style, which characterizes the organ at Notre Dame as well.

“St. Michael’s is thrilled to celebrate the 100th anniversary of the installation of the organ at St. Basil’s, which has been at the heart of our campus community since we opened our doors on Clover Hill in 1856,” says St. Michael’s President Dr. David Sylvester. 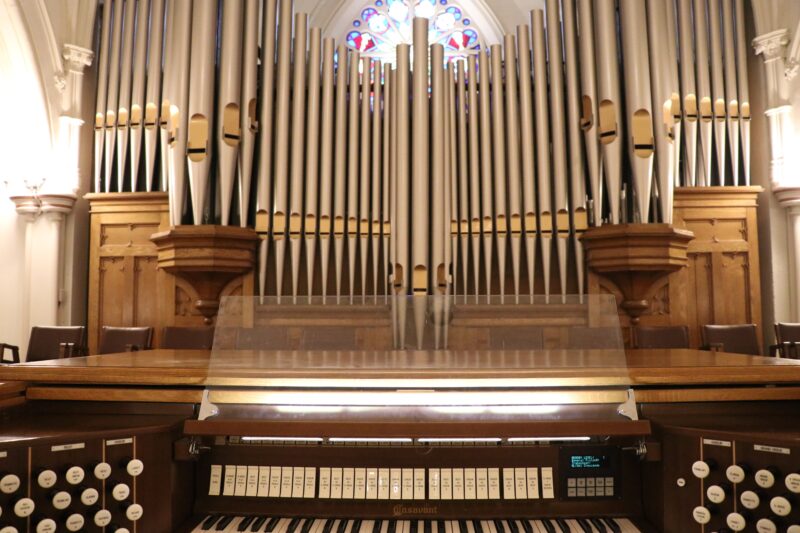 The Casavant Frères organ at St. Basil’s Church was first installed in 1919, and rebuilt in 2017.

Since its installation, the St. Basil’s organ has provided an accompaniment to some of the most important moments in academic and liturgical life for the St. Michael’s community, including convocation and invocation Masses, presidential installations, weddings, funerals—and, of course, the regular weekday and Sunday Mass.

“The instrument Olivier Latry will play marries the academic and liturgical sides of our community. We look forward to welcoming members of our larger university and city community to enjoy Latry’s performance on Nov. 22, a day on which the Church celebrates the Feast Day of Saint Cecilia, the patron saint of music,” President Sylvester says.

Fr. Morgan Rice, CSB, the church’s current pastor, says St. Basil’s is “an enormously important part of not just the spiritual life of St. Michael’s, but also the community life of St. Michael’s.” Students can often be found at the church gathering for events or volunteering with social outreach programs such as Out of the Cold, which provides food and hospitality to members of the homeless population in Toronto.

The longest continuously operating building on the University of Toronto campus, St. Basil’s Collegiate Church first opened its doors in 1856, the day before the opening of the St. Michael’s campus at Clover Hill, its current location. The parish has been administered since its founding by the Basilian Fathers, the same teaching order that helped to found St. Michael’s. 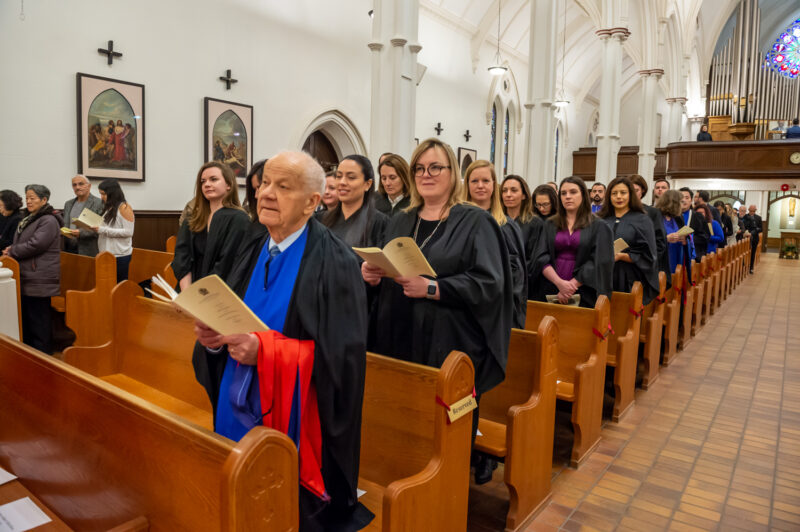 St. Basil’s Church is an essential part of the University of St. Michael’s College community. Many St. Michael’s students attend Mass for both invocation and convocation there, and others volunteer in the parish’s social justice initiatives.

In addition to their presence in college classrooms as professors, the Basilians have remained a central presence at St. Michael’s through their work at the church, providing another point of connection with staff, faculty and students. “I hope that Basilian presence on campus through our ministry at St. Basil’s will continue for many years to come,” Fr. Rice says.

Latry’s Friday evening performance will follow a special interview with Dr. John Paul Farahat, Director of Music and Principal Organist at St. Basil’s. Dr. Farahat, who has performed on the Notre Dame organ himself, directed a rebuild in 2017 of the St. Basil’s organ by Casavant Frères and the Alan Jackson Company that lowered a section of the façade enough to allow the beautiful rose window on the south side of the church to be visible from the floor.

Farahat had two goals for the rebuild of the St. Basil’s organ: “first, to create an instrument for worship and prayer that was viable for the next generation, and second, to make an instrument well suited to French repertoire.”

The lowering of the organ’s façade was intended to create “a visual component to that [beautiful sound].” A priority during the rebuild was creating “an exceptional teaching instrument for organ students in general,” he says.

Farahat says the organ has become a resource to students at the U of T studying organ performance, as well as professors and music directors who come from all over the city to play the instrument.

While Latry is chiefly known as a principal organist at Notre-Dame Cathedral, he is also Professor of Organ at the Paris Conservatory, and his visit to St. Michael’s will incorporate both his liturgical and educational roles.

In addition to his evening concert at St. Basil’s, Latry will provide high-level personalized instruction to four students from U of T’s Faculty of Music, who will have an opportunity to join him in the organ loft Friday morning for a two-hour masterclass. 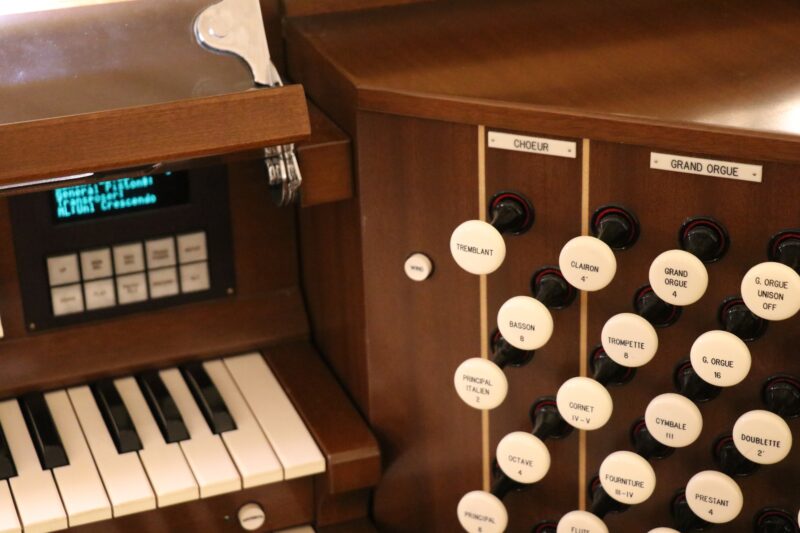 Latry will provide personalized instruction to four students in the U of T Faculty of Music during a masterclass on Friday morning.

Faculty of Music Associate Professor Kevin Komisaruk says the masterclass will give these students “a rare chance to experience customized instruction from one of the world’s most experienced and accomplished professionals.

“Latry is a world celebrity among organists! It is always a transformative thrill for students get a chance to see themselves in their role models,” Dr. Komisaruk says. “We are deeply grateful that St. Basil’s has consistently shown such grace and openness in supporting the pedagogic development of our students by allowing them to practice, study, and perform at this historic instrument.”

Dr. Komisaruk was himself organist at St. Basil’s, and one of the students in Latry’s masterclass, Stefani Bedin, is now Associate Organist at the church. Bedin is also a Doctor of Musical Arts in Performance student in the Faculty.

“Olivier Latry is one of the custodians of the esteemed French organ tradition, so I particularly look forward to hearing his comments on the French organ repertoire,” Bedin says. “It is wonderful that the collaboration between St. Basil’s, the University of St. Michael’s College, and the wider community has made this truly exceptional event possible.”

Latry’s repertoire for the concert will include both sacred and concert pieces meant to showcase the organ’s French Symphonic qualities, but the technical virtuosity is an expression of a simple desire: “It’s nice to share my passion.

“You are always touched by the sound of the organ. You will always find something which touches you,” he says. “I think that related to the music which was composed for the instrument, there is a lot to discover and there’s a lot also to enjoy.”

More than anything else, that enjoyment is what he hopes to provide during his St. Basil’s performance.

“I would say to the people: just come and listen and enjoy.”